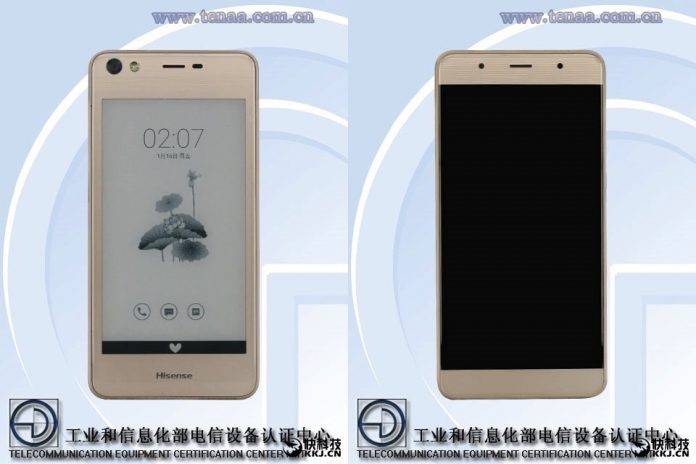 Dual-screen smartphones are nothing new. We’ve seen the YotaPhone before but that one didn’t have any follow-up. The last we heard was that Yota received a multimillion dollar investment for production last year. Just before the year ends, we’re seeing something similar but this time, from a company more known for TVs. Chinese OEM HiSense is believed to be introducing a new smartphone with a dual-screen setup of an E-ink display on one side and AMOLED screen on the other.

Recently sighted on TENAA is this Hisense A2. We don’t know when the company will officially announce this mobile device but a visit to TENAA means it’s about to be unveiled in China. Specs listed include a 5.5-inch AMOLED screen with 1920 x 1080 pixel resolution, 5.2-inch E-ink screen with 960 x 540 resolution, 1.4GHz octa-core chipset, 64GB onboard, 4GB RAM, microSD card slot for storage expansion, 16MP rear camera, 5MP front-facing camera, and a 3000 mAh battery. Phone only runs Android 6.0 Marshmallow out of the box.

There’s no mention of pricing and availability but we have a feeling this phone is more than ready for commercial release. It has the potential to sell compared to the Yotaphone. What’s good about this one is that the e-ink screen promises low power consumption so battery won’t easily run out. The e-ink screen also allows you to display an image even without no power. You can show a static message for a long time which you can use to read e-books or display a message, notes, boarding pass, or a shopping list.