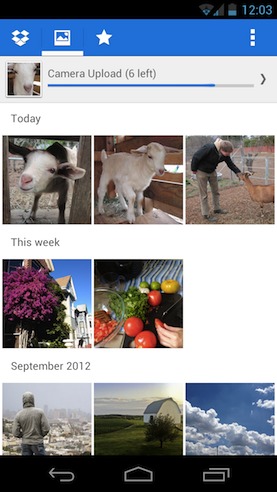 As part of this update, they moved uploads to the menu in the file browser. This allowed them to keep the same number of tabs and not change the look and feel of the application while adding this new emphasis on photos. If you are concerned with the uploads tab missing, take a deep breath and check there, and your mind shall be set at ease.

Dropbox is clearly focusing on photos. Version 4.1 of its Android app added the ability to automatically upload photos over Wi-Fi and cellular data in the background. Dropbox prioritized this new feature so much that it offered users 3GB of additional storage just for enabling this new feature on their devices.

Dropbox’s camera uploads feature shows off photos uploaded from any device, so with this new photos tab, you will be able to see all your pics uploaded on this screen, regardless of where you took them. It makes it much easier to find your pictures and share them with the world. Version 4.2, is available now from Google Play. Let us know in the comments how you enjoy this new feature from Dropbox.