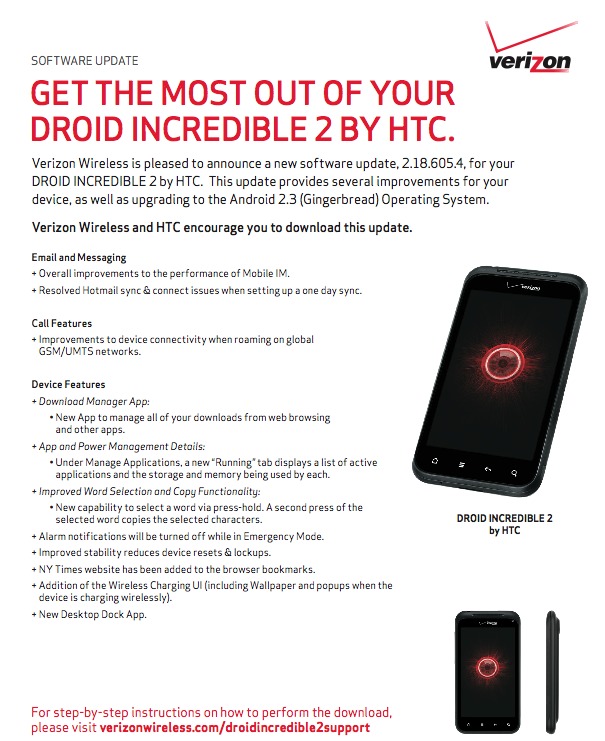 There’s a brand new update out there right this very moment, officially, for those of you with the sweetest little HTC DROID on the market today, the Incredible 2. This update will, as Verizon says, provide several improvements for your device as well as upgrading to the Android 2.3 Gingerbread operating system. Joy upon all joys! This adds to the ever-increasing stack of non-Froyo devices on the market today, growing quick!

This update will not be coming out today, (unless Verizon’s got some sort of strange late-day surprise for us,) but will be coming soon as this update sheet has been literally found on Verizon’s own site. You’ll be getting several new device features including a new Download Manager App, App and Power Management Details — meaning you’ll get a new “Running” tab showing all of your active apps and the storage plus memory being used by each under Manage Applications, Improved Word Selection and Copy Functionality – this being what everyone else has who’re rolling around with Gingerbread – long-press grabbing a word, second press of the sleeked word copying the entire selected set of characters. Great stuff!

You’ll also get a few more updates that’re listed in the release above (and in the gallery below if you’d like to see closer.) Support pages such as the one you’re going to be linked to in a moment generally mean that the update is already out, so we’re expecting perhaps a Monday release of this magnificence. A note to make here for those of you who take the strange road in an out of Android: root access will be taken away from you when you update to this newest version, but of course, as always, you’ll have that road back in sooner than later anyway, so just chill and make it happen.

Screenshots below come courtesy of our good buddies at Android Police – this is what you’re going to be seeing on your device when this update comes through for you:

Check out the original Verizon link over at… Verizon!