The doubleTwist app has once again been updated. This one is not rich with new features, however there is some relatively nice changes. Perhaps even nicer, the folks at doubleTwist are teasing this as being the “first part of a major redesign.” This doubleTwist update, which is already available in the Google Play Store is said to be Stage 1 of the Holo Release. Once updated the app launches to the Music tab and here is where you will likely notice changes in the design.

The app retains the same features and functionality, however navigation throughout the app now uses the Up button. There is also use of the system action bar with accessible actions for any screen. Overall though, you still have the Settings and Videos as well as the Music section which has the breakdowns for Artists, Albums, Songs, Playlists and Genres as well as Podcasts and the recently introduced Magic Radio.

Perhaps key for today though, Stage 1 of the Holo Release update. The folks at doubleTwist have said they took a lot of care to balance the clean and crisp look of Holo with their own aesthetic. As you can see from the images included in this post, the dark styling has not gone anywhere. 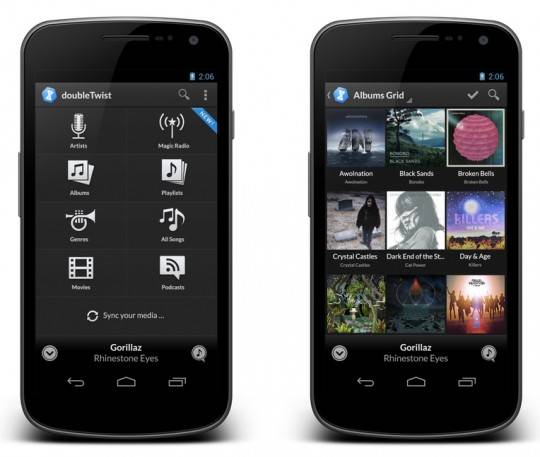 Other details coming from the doubleTwist team touch on how they took care in some of the smaller less noticeable changes. Some of these include the colors and layouts. Even the alert dialogs and prompts have fallen in line with this latest update. The changes for the alerts describe them as being “lightweight and designed with clean, well laid out typography and with occasional use of color highlights.” 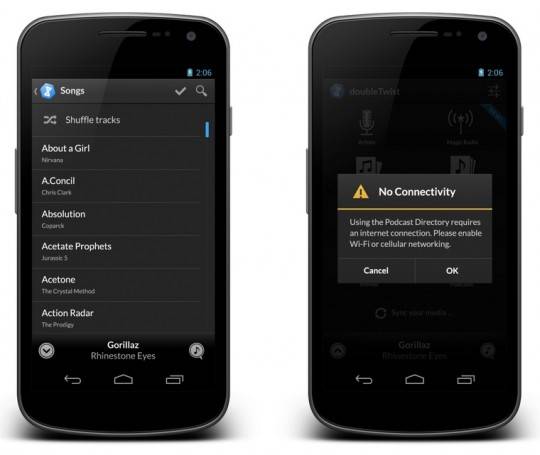 While we know this is part 1 of a series of updates, we have yet to see how many parts would be included overall. With that in mind, the doubleTwist team did leave off with a teaser about how they have “more drastic changes and improvements planned for the future.” Lastly, in addition to the changes and tweaks to the design, this latest doubleTwist update (which landed as v2.0.2) also brought some fixes for issues surrounding podcast skipping.