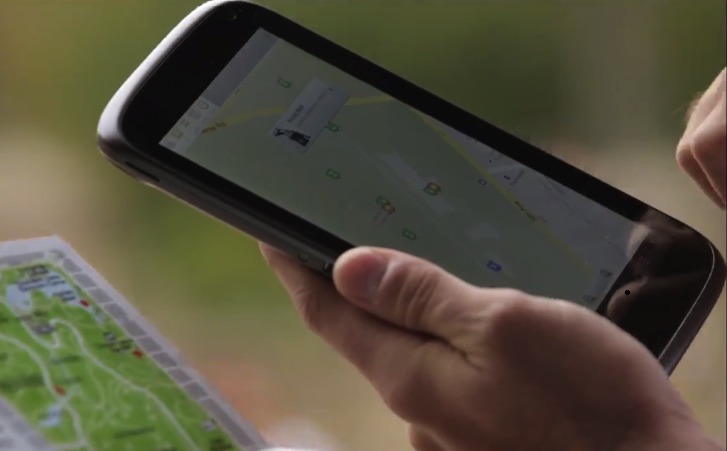 Today Google shared some news and details about their ever expanding Street View project. Taking their cameras and eye-level views through parts of New York City that most might never be able to visit. Things like Central Park and the 9/11 Memorial. While we don’t want to take anything away from them for that, we did notice an interesting device in their video.

There has been tons of talk and rumors around Google’s next Nexus tablet to deliver Android 4.3 Jelly Bean. We’ve been hearing reports of a second-gen Nexus 7 for more than a few months, specs have leaked with ASUS attached as the manufacturer, but we really don’t know at this point. This could just be a random device, of course, but it looks like an HTC-made Nexus tablet if you ask me.

Oh what we’d give for an HTC Nexus Tablet. The Nexus One is still one of my favorite devices to date, and something I wish I would have kept. What you see above was shown off and featured in a video released and published today by Google. The video highlights Street View in New York City, but at about 0:53 seconds in this new slate makes a cameo and has many readers all hot and bothered. Myself included. Take a peek below.

It’s an interesting looking device, that’s for sure. We really don’t know what to think or believe at this point. A few weeks ago another random device was spotted in one of Google’s videos that many thought was the new Nexus, so we’ll just take this all with a grain of salt for now.

Previous reports have Google revealing the next version of Android on June 10th, and we could be seeing a brand new tablet at the same time. We’ll let you guys all decide for yourself, but let us know what you think in the comment section below.