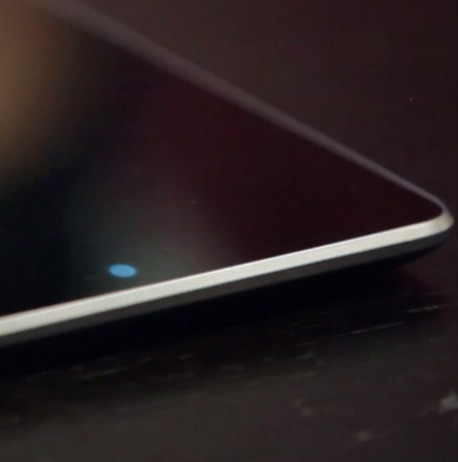 This week Google I/O brought tons of exciting new features and news in the world of Android. Sadly, there wasn’t new hardware or that Nexus 7 redux we’ve been talking about as of late. Many rumors and leaks suggest a new Nexus 7 is coming, but Google didn’t unveil anything. However, their new Google+ Hangouts video released yesterday might have just given us our first glance.

For the few that have owned the Nexus One, Galaxy Nexus, and Nexus 4 (like myself) you all probably love the multicolor notification light Google’s added to these devices. We wish all smartphones had a blinking notification LED, but many leave it out. The original and first Nexus 7 didn’t have this oft-seen Nexus feature, but the next one might.

The image you see above appears to be a tablet, very similar to the Nexus 7, and it rocks the same multicolor RGB notification LED we’ve come to love on other Nexus phones. Yesterday Google unveiled their new Hangouts app for messaging, video calling and more, that’s cross-platform. In their just released video a few seconds in (20 second mark) we possibly get our first look at the upcoming slate. Interesting right? Take a peek yourself.

According to the folks at AusDroid we could be seeing the new Nexus 7 here, before Google planned to mention it. And we’d have to agree. Was this a mistake, or just some casual Google teasing? Previous rumors and reports have stated a 1920 x 1200 full 1080p HD Nexus 7 was in the works, to be revealed at IO, with a Qualcomm Snapdragon quad-core and Android 4.3. Or whatever version of Android they announced.

Since we didn’t get either of those things, what do you guys think? Is this just a promo video we’re looking into too much, or will Google be dropping a new Nexus tablet in the coming weeks or months? Last we heard it was on track for July. Sound about right?