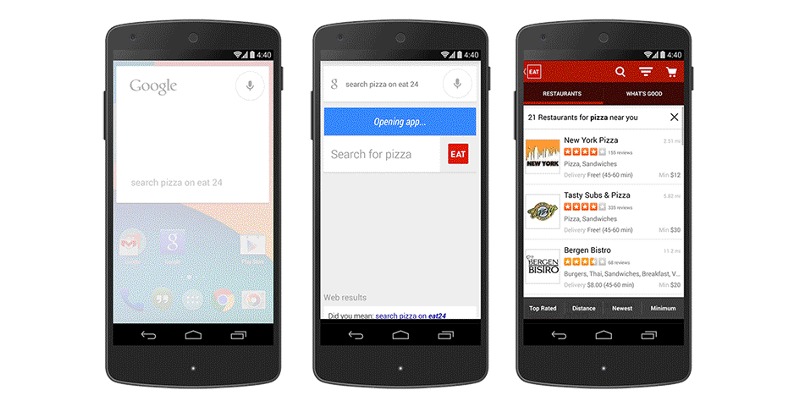 Admit it. Google Now, specifically the “OK Google” trigger, is quite fun to use and play around with, but it’s actual utility isn’t as impressive. That’s largely because, aside from the web and a few other Google-owned apps and tools, its repository of data doesn’t dig deep enough into your phone and its apps. Well, not anymore. Your favorite “OK, Google” can now search inside any app, too! Of course, app developers will need to add the feature, but it’s as easy a copy and paste.

Six lines in total, to be exact. That’s all it takes to connect OK, Google search actions to your app’s searchable activity. That, of course, presumes that your app has a searchable activity in the first place, that is, an activity that lets users search for relevant data and present the results. Of course, not all apps would have this, but for those that do, now they have a quick way for users to make a search without opening the app itself just yet. A simple magic phrase of “OK Google, search for pizza on Eat24” might not give you pizza instantly, but it takes you one step closer to getting there. Plus, with Google Search’s ability to be invoked on any screeen, depending on the device and its status, it means users can have quick access to your app’s data any time from anywhere. Presuming they are running Google Search v3.5 or later, on Android Jelly Bean or later, and locale set to English.

This isn’t the same as Google’s App Indexing feature that it has slowly been rolling out since last year. App Indexing embeds search results, or rather, link to the relevant app, right inside the Google Search app, making it look like a regular search result entry. It also still requires joining Google’s App Indexing party, which is still a limited club as of now. The new search action feature, however, is open all app developers and hopefully our favorite ones will be quick to adopt this new convenience.