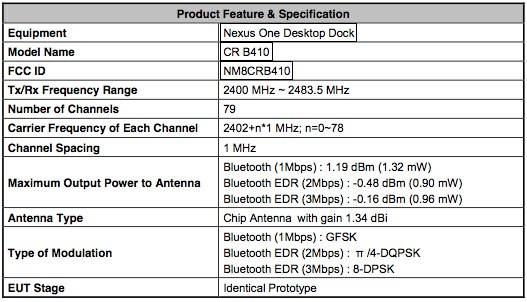 Well, here we go again with the new WOW! phone running Android; the Google Nexus One, which by the way, had its full specs leaked just a few days ago. Now, we have some info about a Desktop Dock, via the FCC, and apparently, it will also have bluetooth connectivity.

After having a blast with all the juicy info on the Nexus One specifications last time, many believed that the next good news would be an actual confirmation from Google on this Android phone. But it seems that the accessories will be the ones taking over the news this time. According to sister site SlashGear, the manufacturer of the Nexus One (HTC) has submitted for approval a Nexus One Desktop Dock with the Model Name: CR B410, to the FCC.

Nobody knows much about this accessory for sure, but it seems to have Bluetooth wireless, as you can see on the image above. Apparently, the Dock will charge the Nexus One, and might even sync via USB to your computer. And maybe, just maybe, the Bluetooth would be for hands-free speakerphone functionality, or maybe it will be used to control wirelessly a home theater systems. Heck! Who knows? But we will keep on digging, so stay tuned.