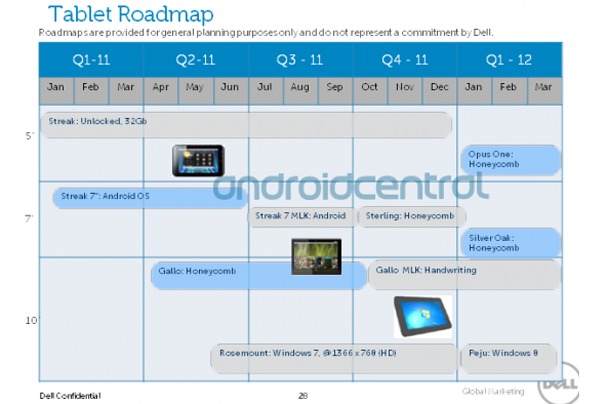 A roadmap outlining some of Dell’s Android plans for smartphones and other gear has surfaced online. According to the roadmap, Dell has a 4-inch smartphone codenamed Hancock that will launch in September. The smartphone is supposed to pack Android Ice Cream, dual cameras, and a dual-core processor.

The smartphone would reportedly have 960 x 460 resolution screen, an 8MP rear camera, and a 1.3MP front camera. The roadmap also shows a 4.3-inch Ice Cream phone for Q4 dubbed Millennium with a 960 x 540 screen, DLNA support, and a dual-core processor.

The roadmap also shows four Dell tablets that are in the works with the Gallo coming in April, the Sterling in Q4 both on Honeycomb. In early 2012, the roadmap has the Opus One and Silver running Android. We have heard grumblings about new Android tablets from Dell already.

Via PC World via AndroidCentral