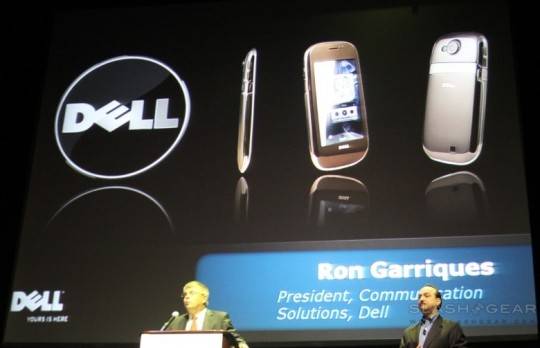 Dell has confirmed that their first smartphone sporting the free mobile OS from Google; the Mini 3, will be landing to AT&T. As you might remember, the Mini 3 Android handset was officially announced to go to China Mobile and Brazil’s Claro back in November.

AT&T had announced already their intentions to release 5 different Android-based devices on 1H 2010 with devices from Motorola, HTC and Dell. The Mini 3 will be Dell’s offering in the wireless carrier network, but there’s no word on the release date just yet.

Dell is not giving any information on the full specs of the Mini 3, but is only logical to assume that it will be similar to the Chinese Mini. What do you think folks, will you buy the Dell Mini 3 from AT&T? Or you don’t like the handset or AT&T’s service enough to jump ship?

LAS VEGAS, JAN. 6, 2010 – Dell today announced that U.S.-based AT&T will become the next mobile operator to offer a smart phone from the Mini 3 Android-based lineup. Over the past two months, Dell has established smart phone arrangements with leading mobile operators including the world’s largest, China Mobile, Claro in Brazil, and now AT&T with the nation’s fastest 3G network.

Today’s announcement builds upon Dell’s mobile strategy of delivering communications solutions for wireless operators and their dedicated customers. Dell works with select operators around the world to make the most of their customers’ mobile experiences – on any network and using any application.

The arrangement with AT&T is part of Dell’s continued focus on developing smart mobile products and services through value-added relationships with leading operators. Dell has existing arrangements with other leading global telecom providers, including Vodafone in Europe, Australia and New Zealand; AT&T in the United States; M1 and Starhub in Singapore; Maxis in Malaysia; China Mobile in China; and Claro in Brazil – each creating more opportunities to meet the needs of the connected lifestyle.

Dell has contact with and listens to the requirements of millions of customers. In addition, a recent Dell-sponsored study of more than 1,500 people provides keen insight to what makes for the best smart phone and mobile experience. Study highlights include:
· Eighty-two percent of those who own smart phones said they would not leave home without them;
· Eighty-six percent of survey respondents under age 35 say that personalized software and features on smart phones are important;
· More than half say they wish there were more smart phone options available in the marketplace;
· Seventy-six percent say they would consider new smart phone devices from a well-known technology brand; and
· Nearly 90 percent say they would consider purchasing a smart phone from a highly regarded technology company as an alternative to leading smart phone manufacturers.

“Smart phones are an extension of Dell’s strategy to develop intelligent and more mobile products that meet the needs of operators and customers,” said Ron Garriques, president, Dell Communication Solutions. “The Mini 3 is a result of listening to customers and creating products that allow people to do the things they want, whenever and wherever they want to do them.”

“As the leader in smart phones, AT&T makes a great match with Dell to introduce the next Mini 3,” said David Christopher, chief marketing officer, AT&T Mobility and Consumer Markets. “We offer our customers what no one else can, the nation’s fastest 3G network, the nation’s largest Wi-Fi network and now, Dell’s first smart phone in the U.S.”

Details about Dell’s Mini 3 will be announced by AT&T closer to device availability expected during the first half of 2010.