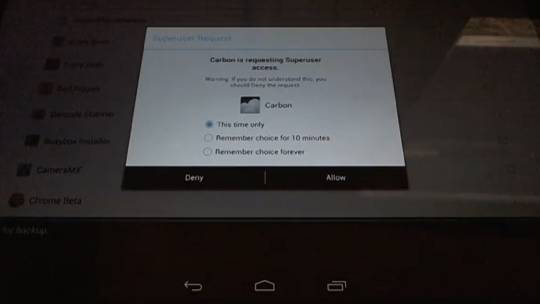 Koushik Dutta has released his latest app. We suspect many will be familiar with that name, he is associated with ClockworkMod and also recently released Carbon. On Carbon, he is responsible for the backup app, not the Twitter app. We can put that bit aside though because this latest app deals with the ClockworkMod side. The app is called ClockworkMod Superuser and it has been released as beta 0.

The app is available by way of his Google+ page and can be downloaded and used for free. In fact, one of the main points about the app is that he wanted it to be free. Another point mentioned includes that he released this app with the intent to have it available as an open-source app. For now we would say this is something that the more advanced user would look for as it is a bit more than installing a simple APK file.

On the flip side though, we suspect that if you knew and/or were excited about a new superuser app being released — you likely understand (or are willing to learn) what you will need to do in order to make it work. That said, lets get into the features of the app. Some of the main points include the app having proper support for multi-user, which was introduced in Android 4.2. The app brings features to include logging (including per app logging) and notifications with the ability to customize them.

Other features include PIN protection, the ability to adjust the request timeout times and the ability to handle concurrent su requests properly. This app will also go above in terms of making it clear when an app is root. The notes list the app as having a “pretty” user interface. More specifically, Dutta has said that Superuser will work on both a smartphone and tablet and that the tablet mode looks “fairly decent.” Finally, while no timeline was given as to when, it was said that “eventually there will be an installation/upgrade process in just the APK itself.”