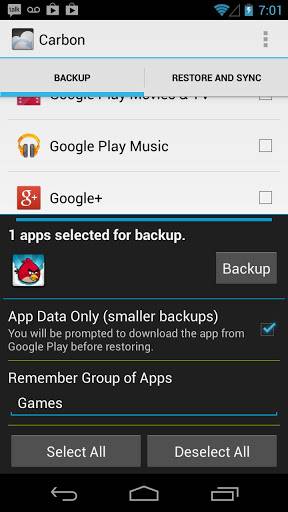 Carbon has finally arrived in the Google Play Store, ending beta testing and offering up two versions for Android users to download. Carbon is an app that can back up your data to an SD card, your PC, or the cloud, and it’s a release that Android users have been waiting quite some time for. Users will have their pick from free and premium versions, with the free version obviously coming with some restricted functionality.

Specifically speaking, those using the free version will only be able to backup and restore from SD cards and computers. The free version is also ad supported, so if you hate seeing ads in your Android apps, shelling out for the premium version might be the better idea. By paying $4.99, you’ll remove the ads, along with enabling Android-to-Android app sync and cloud backup and restore.

Setup is a little bit of a chore compared to other Android apps, but only for those using a non-rooted device – rooted users only need to install the app and then they’re good to go. Non-rooted users, on the other hand, will need to install Carbon’s program for their PC. This, in turn, requires the installation of “adb” drivers that allow your phone to connect to your computer, but thankfully Carbon has provided links to most of these drivers on its website. Once Carbon Desktop and the drivers have been installed, connect your device to your computer and you should be ready to use the app. 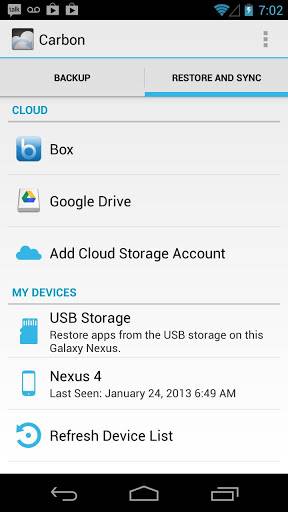 It’s a little more complex than some will be used to, but Carbon makes it easier by providing links to the drivers you need and making versions of Carbon Desktop for Windows, Mac, and Linux. The free version is definitely aimed at getting you to upgrade to the premium version, though, as that limited functionality seems like it will get in the way. Not having cloud storage to fall back on if your SD card fills up will probably prove to be a headache at some point down the road, so if Carbon is what you want, it may be worth it to hand over the $4.99 right from the start.

There’s also another issue: Motorola users are sadly out of luck with this full release. Developer Koush says this is “because Motorola phones have a bug that break Android’s backup mechanism,” and that there’s nothing he can do about it until Motorola itself fixes the issues. Despite this bug, some Motorola devices may still play nice with Carbon, and if you find one that does, Koush would like to hear from you.

All in all, Carbon seems like a good choice for those who are looking for a way to back up things from their device, but as stated above, buying the premium version at the start seems to be the way to go. Since that purchase is needed to enable cloud backup, some will consider it essential, and the fact that it gets rid of ads helps as well. Both the free version [download link] and the premium version [download link] are available now on the Google Play Store. Are you going to give Carbon a spin today?