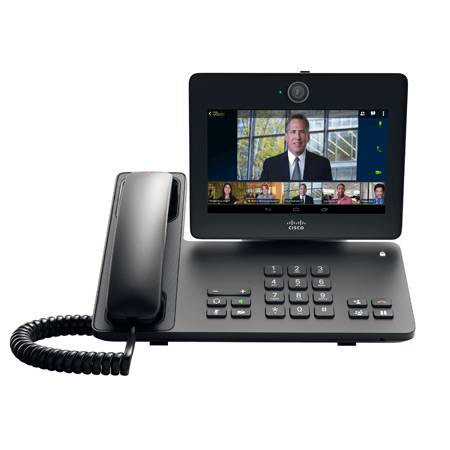 There is no doubt that Android is almost everywhere, powering a wide variety of smart devices ranging from the usual suspects of smartphones and tablets to the more multimedia-centric boxes and TVs. Android has even appeared in some traditional landline situations, as an add-on tablet, a dedicated cordless home phone, or, in this case, a fixed display for an office phone. Make no mistake, though, as Cisco‘s DX650 phone is all about business and very little about entertainment.

The Cisco DX650 sports the usual design you’d expect on a no-nonsense office phone, phsyical buttons, speaker phone, handset receiver, and all that. The similarities, however, end when you notice the conspicuous display sitting on top running Android. One might wonder what such a contraption would be doing on a business device. Quite plenty, it seems.

One would naturally think about video calls and conferencing, and indeed the DX650 supports that with a webcam that can make 1080p video calls at 30 fps . But the phone cum tablet also has a bevy of features that, in Cisco’s words, can boost productivity by simplifying workflow. The device integrates well with a lot of Cisco’s enterprise services, such as file sharing with Cisco WebEx, instant messaging with Cisco Jabber, virtual private network (VPN) with AnyConnect, and much more. With access to Google Play Store, users can also install and use other Android apps. It also has some rather interesting features as a communication device, such as sharing contacts and call logs with users’ smartphones over Bluetooth and seamless transferring audio calls from smartphones to the desk phone.

The Cisco DX650 is powered by a 1.5 GHz dual-core TI OMAP 4460, the same chip on the Samsung Galaxy Nexus, and 1 GB of RAM. It has 8 GB of internal storage and runs an old Android 4.0.1. Fortunately, at least for management, the 7-inch 1024×600 capacitive touchscreen display cannot be detached and used as a standalone tablet, otherwise the promise of increased productivity might very well fly out the window.