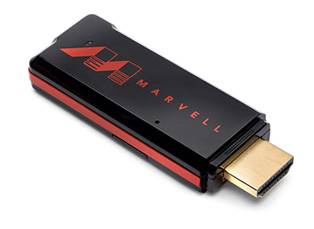 Taking a cue from the the flurry of interest and support that has surrounded Chromecast, chip manufacturer Marvell has announced a new System-on-Chip (SoC) made precisely for connecting to HDMI displays and streaming media. Marvell also provides the SoC that is used on the Chromecast dongle itself.

Marvell’s ARMADA 1500-mini is aimed to be a cheap chipset to be used in devices similar to Chromecast. Google’s hottest new product is a device the size of thumb drive that connects to displays over HDMI and allows streaming of media over a WiFi network. It currently supports streaming from YouTube, Netflix, and Google Play, with more services promised to come soon. A beta plugin for the Chrome will also allow contents of the browser tab to be mirrored to the TV via Chromecast.

According to Marvell’s announcement, the ARMADA 1500-mini is optimized for 1080p content and is designed for delivering high quality video and audio output while still retaining energy efficiency. This makes it perfect for not only dongle-type form factors like Chromecast but also for set-top boxes and smart TVs. This could be enticing for third-party manufacturers who want to take advantage of the gap in the market left by Chromecast, which sold out very quickly.

It is not known whether the ARMADA 1500-mini is the exact same chip that powers Chromecast though it is very likely. Marvell has not yet released detailed specifications nor how much it will cost, although it will probably be priced competitively with Chromecast, which only costs $35.