Google has just pushed an update to the Chromecast Android app that looks just a tad normal. However, given recent circumstances and new leaks, the nondescript update might be paving the way for the streaming dongle’s international release.

The update changelog basically mentions, aside from some new settings and bug fixes, improvement of support for Samsung’s Android devices. But perhaps more interesting is the note that reveals that the app now supports over 50 languages. Of course, that could just mean being able to use the app in the language you prefer. But it could also be one step towards making the Chromecast available in more markets outside the US.

At his keynote at SxSW early this week, Google SVP Sundar Pichai shared how the Chromecast was sold in the millions, just in the official retail channels. He also reiterated that Google wants to spread the device even further across other regions. It seems that promise might soon be fulfilled, at least for the folks in the UK. 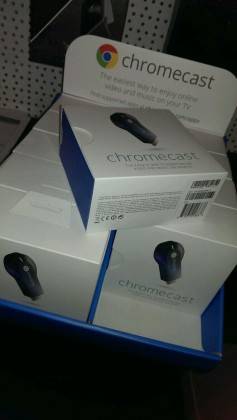 A leaked photo appeared on Twitter showing boxes of the Chromecast dongle supposedly sitting inside UK retailer Currys/PC World. No official launch date has been announced but it probably wouldn’t be too long now if stocks are already being filled up. It is also not yet known what price tag will be slapped on the UK versions, though hopefully it wouldn’t be too far from the $35 in the US.