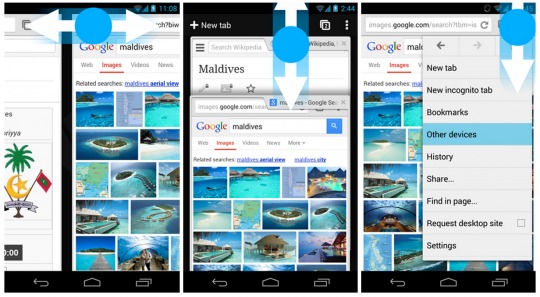 It’s been quite a while since we’ve last heard from Google about their popular cross-platform web browser. Now it is finally announcing the latest version of the Chrome browser for Android that brings in new features that were introduced in Chrome Beta more than a month ago.

Last August, Google gave a preview of some new gestures that it had been developing for the Chrome browser and released it on Chrome Beta for Android. These gestures included the ability to swipe horizontally across the top toolbar to switch tabs. Users will also be able to swipe down from the top in order to trigger the tab switching view. And finally, swiping and dragging from the menu button on the top right will pop up the menu and let users select an item without having to lift their finger again.

These new features are now exiting beta testing and will be making it into the main Chrome for Android release. As always, the new release will also include a variety of tweaks and bug fixes, including those that cause the browser to crash.

The updated Google Chrome for Android is already rolling out but, as is the case in most of these releases, it will take some time before it reaches all regions worldwide.