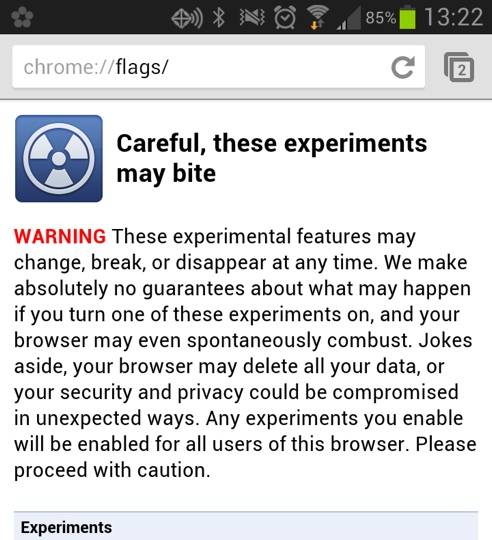 Google launched the Chrome Beta for Android app earlier in the month and it looks like we have been given an app that will see regular updates. The app had some new features added a few days after the launch and some more have arrived today. For those trying to keep track, this latest Chrome Beta update brings the version number up to 25.0.1364.47. Of course, if you have any doubt about the version you are running, it is likely easier to fire up the Play Store and see if an update is waiting.

That being said, the Chrome Beta app maintains the requirement of Android 4.0 or later for use and brings “chrome://flags” support. For those not sure what this means or how to proceed — this means access to some experimental features. You can access them by launching the app and typing “chrome://flags” in the URL bar. From here you will be greeted with a warning page letting you know (amongst other things), that “these experiments may bite.”

The long and short of the warning is that you may have issues and that these features may “change, break, or disappear at any time.” This warning may sound familiar to those who have played around with some of the experimental features on the desktop version of Chrome. Forgetting the warning and diving in, you will need to skim down and look to see which are available for Android. You can find the Android designation to the right of the experiment name. Or alternatively, you can look for the blue “enable” link

Some of the experiments include being able to disable accelerated CSS animations, add an FPS (frames per second) counter, GPU accelerated SVG filters and perhaps one of the more exciting — enabling support for WebGL. The WebGL support should help with things in terms of 3D graphics. The nice part about being able to enable WebGL in the browser, this was once a task that was limited to those who were rooted.