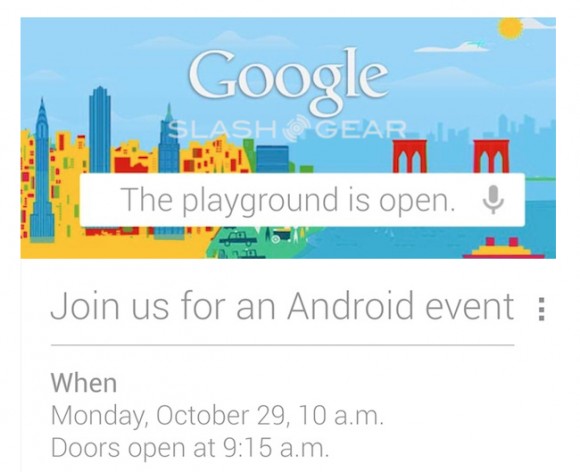 October 29 is right around the corner, and all will be revealed from Google. Actually, it looks like all has been revealed a little sooner, at least according to TheNextWeb. It looks like many of the rumors we’ve been reporting over the last couple weeks are actually true, which always makes us happy.

The biggest piece of news has to be the inclusion of the LG Nexus 4 and the fact that it actually exists. As expected, it will be based on the LG Optimus G. The phone will have a 4.7-inch 1280 x 768 display, a 1.5GHz quad-core Qualcomm APQ8064 Snapdragon processor and 2GB of RAM. It will also be the first phone to use Android 4.2 which is not known as Key Lime Pie, as many expected. While it will still be called Jelly Bean, it will have some new features such as a new widget for Google Play content and the ability to have multiple user accounts on a single tablet. Android 4.2 will also include a new panorama mode for the camera that allows both horizontal and vertical panning.

It also appears that Google will be announcing a new 10-inch Samsung tablet. This tablet, which has been code named “Manta,” is expected to use a 2560 x 1600 display. We assume the name will be changed to Nexus, to keep with the naming conventions users are accustomed to.

The leaked plans include the 32GB Nexus 7, which may well be the worst kept secret in the history of technology. It seems like everyone and their mother knew this device existed, but Google will make it official on the 29th. What we did not hear nearly as much about is the 3G version of the Nexus 7, but it appears as though Google will announce that as well. We will have to wait until the event to find out what Google will offer in terms of data plans for this 3G version of its tablet.