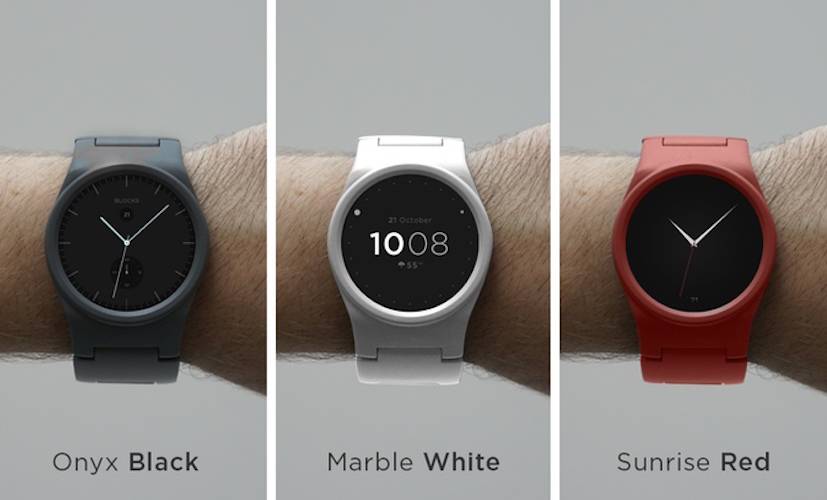 Blocks is the first modular smartwatch in the world. It was introduced by Phoneblocks, a company that makes modular smartphones for people who want a more personalized and customized device. Right now, it’s on Kickstarter published by BLOCKS Wearables. It’s currently listed with a $250,000 pledge goal but with still 36 days more to go, amount raised is now over $400,000. Thanks to those 1,460 backers who believe in this modular smartwatch that took on the idea of a modular smartphone, very much like the ‘Project Ara’.

While we have yet to see the actual Project Ara phone arrive in the market, this modular smartwatch might be released ahead of schedule if things go well. It’s smaller and easier to assemble compared to a mobile phone. With Blocks, you only need to choose the modules you want found on the links of the watch strap. Each one comes with each function. Select those features or specs you need. This means you can easily swap or upgrade the product when you want to or need to. This way, the smartwatch won’t be outdated because you can always upgrade the links of the strap.

The team behind the Blocks modular smartwatch believes that watches should last. It’s meant to be timeless. What’s the point of having a classic-looking watch if the specs easily get old and outdated. Blocks is meant to “evolve” and keep up with technology. BLOCKS Wearables promised that they will be releasing new modules regularly and as soon a new tech is available.

More customization options are available too as the smartwatch uses an open platform. Anyone can make or use modules whether for school, workplace, sports, gaming, or healthcare. More modules are being developed as of the moment. BLOCKS Wearables have already partnered with some major tech groups. More than 1,500 developers have signed up to get the Module Development Kit (MDK) and the Software Development Kit (SDK).

Of course, it will need a Blocks companion app and a BLOCKStore will be opened for companies and individual developers to create and start selling their modules. Smartwatch owners can buy new or trade their modules from the BLOCKStore as well.

A minimum pledge of $5 is accepted but if you want to get a core and strap, donate $195 and the team will send you one set. If you’re too generous, give as much as $7,800 and get 30 full BLOCKS watches.