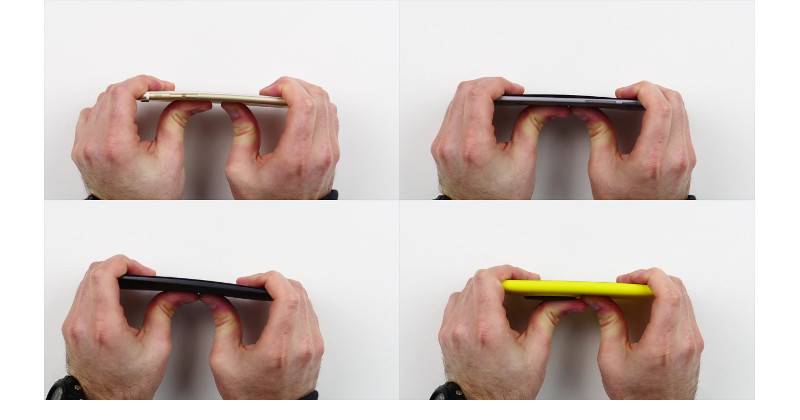 What’s hotter than a new Apple iPhone? A new Apple iPhone that bends! Unbox Therapy returns with a larger set of smartphones across different manufacturers to test, even an older Nokia Lumia, just to prove that not everything bends to the forces of nature, or your hands, or your thighs, so easily as the iPhone 6 Plus.

It’s only reasonable to put the smaller iPhone 6 to the same torture as its bigger sibling. And it is somewhat also reasonable to expect that it won’t be so quick to yield, which is what this new test video proves. Though presumably made of the same materials and with the same meticulous care that Apple is so famous for, the iPhone 6 barely budged. The theory is that because it is smaller, it is more compact and therefore less susceptible to bending. But then again, the Galaxy Note 3 is actually larger than even the iPhone 6 Plus and yet it fared better than Apple’s first phablet.

One device that immediately came to mind when #bendgate started was the HTC One M8, because of its similar aluminum material and unibody design. It’s 5.0-inch screen also sits somewhere in between the 4.7-inch iPhone 6 and the 5.5-inch iPhone 6 Plus. That said, HTC’s 2014 flagship would not budge. Well, not entirely. It was amusing to note that the screen bulged out a bit where the force was being applied but went back to normal afterwards.

The real winner of this batch, however, is the completely new Moto X. Though also with an aluminum frame, Motorola’s latest masterpiece was noted to be impossible to bend with bare hands. No creak, no sound, no movement, no bulge. A solid piece of slab that attests to Motorola’s attention to quality which will hopefully carry on even under Lenovo’s flag.

For kicks, Unbox Therapy threw in a Nokia smartphone, particularly a Lumia 1020. Nokia’s devices have long been the center of praise and jokes for being tough and rugged, though its Lumia line still has to be put to the test. The Lumia 1020, in particular, has a 41 megapixel PureView camera which might make your presume it has some very sensitive and fragile components inside. Lo and behold, aside from an initial movement of the screen, the Lumia 1020 proved that Nokia still has it. Or had it, rather. Let’s see if Microsoft will be able to keep that tradition going.