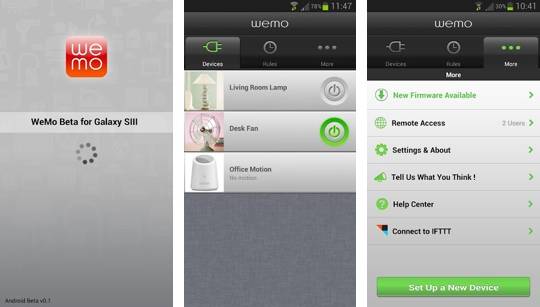 Belkin announced they had an Android app in the works back in January during CES. At the time they had said the app would arrive in February and that it would be available for select devices. Well, the app has officially landed in the Google Play Store. The app is dubbed the “WeMo Beta for Galaxy SIII” and as the name would imply, it has been released in beta form and with support for just one device.

The catch here, Belkin has said that while this app was specifically tested on the Galaxy S III, all devices running 4.0 or higher will be able to download the app, however “stability and performance can’t be guaranteed.” That aside, we can hope that the test phase goes well and handset support soon expands. Until that time though, the app is available for free, but does require a WeMo branded product for use.

For those not familiar with the Belkin WeMo products, think home control and automation using your smartphone. Belkin has the WeMo Switch, WeMo Switch + Motion and the WeMo Baby. Take the Switch for example, this will allow you to take anything that plugs in and turn it off (or on) using your phone. The + Motion aspect just brings a motion controller into play an the Baby, well, that is an audio baby monitor for remote monitoring.

Getting back to the app and we have most of the features that we would have hoped to see. The app will allow you to control WeMo devices as well as setup custom icons and names. You can also take advantage of the IFTTT integration. The app will allow for local firmware updates, however remote firmware updates are not yet available. The other missing item is WeMo rules support, however the IFTTT integration removes some of that sting.

Finally, some known issues that users may want to be on the lookout for include app crashes caused by poor signal strength, fast switching of tabs can also sometimes lead to a crash and local discovery will not always show all WeMo devices. Basically, this does not sound like a perfect app, but it does at least give Android users entry in the WeMo product line. Those interested can grab the app using this Google Play Store link.