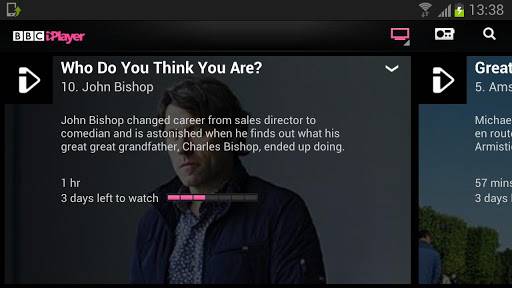 The BBC iPlayer app was updated for Jelly Bean back in mid-October, however since then, some things have changed. Namely, Android 4.2 has been released and 7-inch tablets (such as the Nexus 7) have become rather popular. On that note, details coming from the BBC spell out some big plans for the iPlayer app on Android.

In fact, a recent posting on the BBC Internet Blog notes that “the Android platform is extremely important to the BBC and our audience and engineering for it requires an ongoing commitment.” Perhaps more to the point here, the iPlayer app will be getting some updates. The first of these updates is available in Google Play right now.

This most recent update includes support for Android 4.2 along with improved video performance over Wi-Fi. The app has also gotten an additional channel, BBC Alpha, and the overall design has been “polished.” This update brings the iPlayer app up to version 1.5.0.666.

Looking forward past this update, the details from the BBC also mention that they have a series of updates planned for the coming months. These updates will include improvements for tablets such as the Nexus 7 and Kindle Fire HD as well to bring parity between the iOS and Android apps. Bottom line here, the iPlayer app has been updated and it looks like users should remain on the lookout for additional updates as we move into 2013.