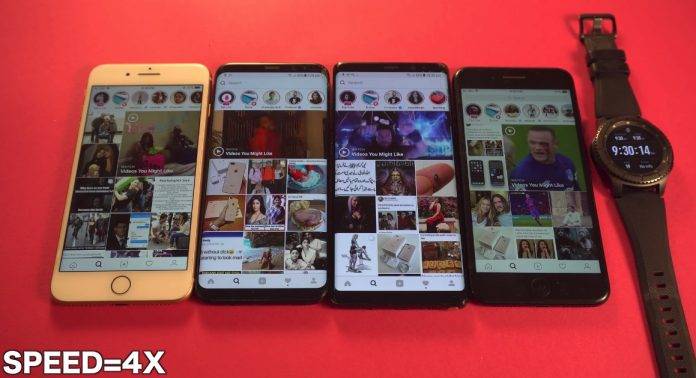 If not the camera technology, phone makers are working to improve their devices, whether flagship or budget-friendly, by using the latest processors. If not processors, then perhaps by adding bigger batteries. The newest premium flagship devices today by some of the top brands are being compared side-by-side. There’s the Samsung Galaxy Note 8 compared to the bigger Galaxy S8 Plus and against the older Apple iPhone 7 Plus and the new iPhone 8 Plus.

XeeTechCare, the same guy who put the Samsung Galaxy S8 and S8 Plus in a Battery Drain Test, has done another similar test with the four aforementioned units. The fully-charged smartphones were laid down on a table with a timer running to determine how fast the battery of each phone will drain.

Battery Life Drain Test: iPhone 8 Plus vs Note 8 vs S8 Plus vs 7 Plus

The iPhone 8 Plus has a smaller battery so we’re not expecting much from it. The Samsung Galaxy phones have bigger batteries so we know they will last longer. After two hours, these are the percentage of battery loss:

Further exhausting the batteries by running videos on each phone, percentages of battery loss are even lower. Draining the battery some more by playing games, the iPhone 7 Plus’ battery drained first followed by the iPhone 8 Plus while the Note 8 and the S8 Plus are still running 29% and 21% battery level, respectively.

The next part of the test is running the phones by camera usage until one is dead. The clear winner? The Samsung Galaxy S8 Plus still on 7% after over seven hours.

Another battery drain performance is being looked at that compares the iPhone 7, iPhone 8, iPhone 8+, OnePlus 5, and the Samsung Galaxy S8+. We’re rooting for the Galaxy S8+ but surprisingly, the OnePlus 5 is the one leading. After 3 hours, the iPhone 7 and iPhone 8 are dead. The iPhone 8+ is still at 18% battery level while the Galaxy S8+ is on 42%. The winner: OnePlus 5.