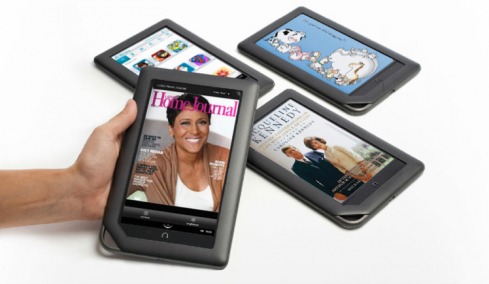 Amazon’s Kindle Fire is sitting squarely in the spotlight at the moment, and Barnes & Noble investors are taking notice. The bookseller’s stock price took a sizable 4% hit yesterday, with early Thursday trading sending it down another 3%. At its lowest point on Wednesday Barnes and Noble’s stock hit $11.48, a loss of over 10%, but late trading helped the price rally.

The Kindle Fire is seen as a competitor to Barnes & Noble’s popular Nook Color tablet/reader, with the two Android-based devices sharing form factors and usage scenarios.  To help spur sales, Barnes & Noble is offering existing customers a $25 discount on the Nook Color plus free shipping, bringing its total cost down to $225. The promotion was already in place at the time of the Kindle Fire announcement, but Barnes & Noble sent out additional emails afterwards.

When Barnes & Noble released the Nook Color last year, they seemed to have a decided advantage in the small “e-reader+” space. Now that Amazon has undercut the Nook Color with its $199 Kindle Fire, not to mention a new range of cheaper e-ink Kindles to compete with the Nook Touch, that no longer seems to be the case. It doesn’t help that Amazon has a lead on Barnes & Noble when it comes to third-party media, like streaming video and the Amazon App Store. Of course, rumors persist of a Nook Color 2 coming in the fall or winter, when we’re likely to see Barnes & Noble face each other directly with current hardware.