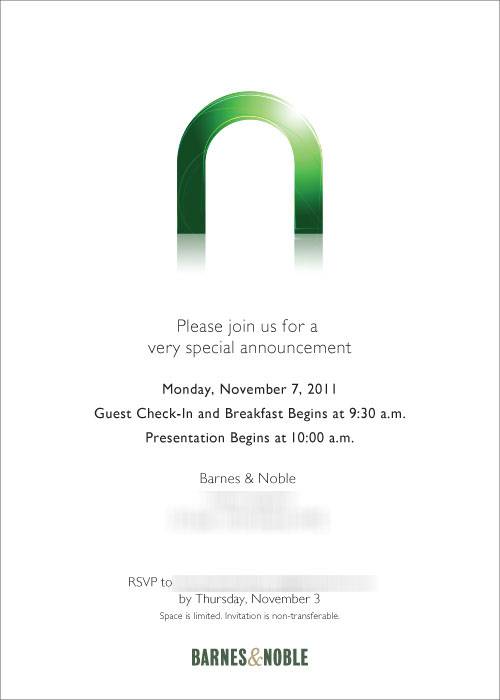 We’ve been hearing rumblings of a sequel to Barnes & Nobles Nook Color reader/tablet for months, and it looks like predictions for a November 7th launch were right on the money. Invitations for a “very special announcement” bearing the distinctive Nook logo are arriving in the inboxes of major media now. The Nook Color 2, or whatever it will be named, seems almost certain at this point.

Barnes & Noble is playing catch-up, at least in the publicity race: Amazon’s similar full-color, 7-inch tablet the Kindle Fire also runs a modified version of Android, and wil lbegin shipping out to customers on November the 15th. Most impressively, it’s just $199, putting it into impulse buy territory when compared to $400-$500 full-sized tablets. Various estimations put pre-order sales at around a quarter million already, and Amazon might be able to make as many as 5 million by year’s end. Retail employees are already reporting displays and marketing material being prepared in bookstores ahead of Barnes & Noble’s event.

The original Nook Color is still competent for its intended purpose, reading ebooks with some light browsing, emailing and video. The $250 tablet gained notoriety among Android enthusiasts for its easy hackability via a boot table that defaulted to the MicroSD card. CyanogenMod 7 is a popular ROM, and the Nook Color was technically one of the very first devices to run Android Honeycomb via an SDK port. Who knows if Barnes & Noble will keep the easy-modified software structure of the original Nook Color, but they’ll almost certainly try to compete with Amazon’s rock-bottom pricing.