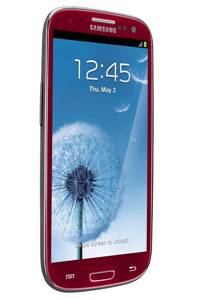 To be honest, a limited edition smartphone coming with any sort of red color you’d expect to arrive on Verizon Wireless since everyone knows they are “Big Red.” However AT&T managed to snag the exclusive Garnet Red flavor of Samsung’s Galaxy S III smartphone, and have just announced pre-orders start on Sunday the 15th.

Just like the standard Galaxy S III from AT&T (Reviewed here) the Garnet Red will be priced exactly like their pebble blue and white models which is $199 for 16GB, and they didn’t mention a 32GB version. When AT&T announced pre-orders for their Galaxy S III back in early June they tipped us off about the limited edition color, but this is the first they’ve mentioned it since. For those looking to break out of the mold and be a bit different, you can get it in stores come July 29th.

Would you buy the red version from AT&T, or do you like the white or blue version?