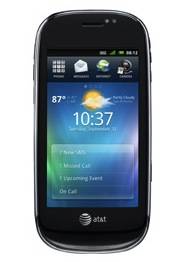 AT&T have announced their first Android smartphone, the Dell Aero, which looks to be their rebadge of the Dell Mini 3.  Details on the handset are scant – we’re expecting to hear more at CTIA Wireless 2010 this week – but AT&T have confirmed that they’ve worked with Dell on re-skinning the standard Android UI.

Otherwise we’re guessing the handset is a 3G phone with a 3.5-inch 640 x 360 touchscreen display, and a 3-megapixel auto-focus camera with flash.  There’s also Bluetooth, a microSD slot, and GPS.

According to the AT&T press release there will eventually be an Aero mini-site at www.att.com/aero; however it doesn’t appear to be live at time of writing.