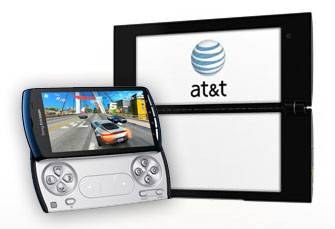 Do you like Android handsets and tablets? Got a thing for non-standard form factors? Want to sign a new contract with AT&T? Then you’re a member of an extremely small niche, one that’s coincidentally served by AT&T’s latest Android phone/tablet bundle. Sony’s brand-new Tablet P and the somewhat less than new Sony Ericsson XPERIA Play get the treatment this time: you can pick up both on a pair of new contracts for just $299.99. That’s a savings of about a hundred dollars, were you to buy them separately: the Tablet P is $399 and the XPERIA Play is just 99 cents.

It’s got to be said that both devices are somewhat behind the times as far as hardware goes: the XPERIA Play uses a 1Ghz single-core Snapdragon processor, while the Tablet P is still using the Tegra 2 dual-core system-on-a-chip. That said, both offer form factors and potential use cases that just aren’t possible with any device in their class. The XPERIA Play bundles in a sliding PlayStation-style game pad, and the Tablet P has a unique clamshell design that crams a 10-inch split screen interface into a device that can fold down and fit into a large pocket. Both of them get access to Sony’s proprietary media (including the PlayStation Store) as well as the standard Gingerbread/Honeycomb Google apps. Both of them have access to AT&T’s 4G HSPA+ network, but not LTE.

Signing up for two new data plans is a hard pill to swallow, and there’s no way to share them. But if you’re an avid gamer who wants both a smartphone and a tablet, and who doesn’t mind playing with the best hardware from mid 2011, it could be a tempting offer. If you’re on the fence, be sure to check out our review of the XPERIA Play, and our hands-on of the recently released Tablet P. The review should be coming along shortly.