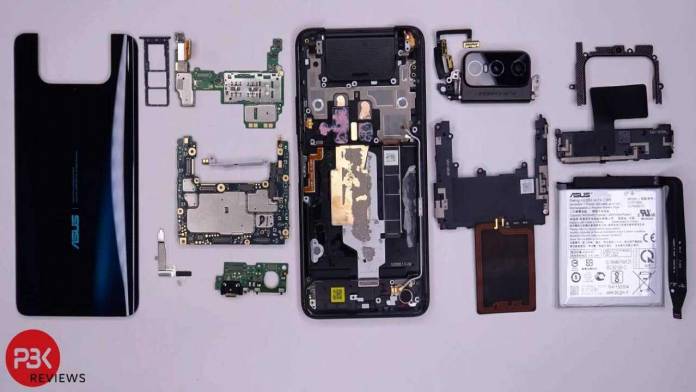 PBK Reviews got down to disassembling the Asus Zenfone 7 Pro which like its predecessor has a flip-up camera. This flagship device by Asus has top of the line Snapdragon 865 Plus processor and a huge 5,000mAh battery for all your process-intensive tasks. The teardown expert got down to removing the phone’s hardware, in the process revealing copper heat sinks and pipes for active heat dissipation. The smartphone is pretty easy to disassemble for the most bit, however, there are a couple of components glued too well, making them harder to take out.

The teardown starts with heating the glass backplate with a heat gun to loosen the adhesive, and then the pry tool for taking it apart. The top plastic cover having the NFC antenna (with antenna lines running on the plastic) is then taken off by unscrewing the 18 Philips screws. After removing the battery cable, the rest of the cables are disconnected.

After removing some more cables and screws, the mainboard having the copper plate, processor, and thermal paste is detached. Then comes the turn of speaker assembly and the charging port board. PBK Reviews then gets down to lifting the battery which wasn’t that hard.

To remove the flip-camera assembly a couple of screws are removed to take out the module. Unlike Zenfone 6, the Zenfone 7 Pro has a motor on the camera module itself. Underneath that is the SIM tray which is easily dislodged by prying since it is attached with the adhesive.

Thereafter he goes on to explain how to remove the screen by heating it with a heat gun from underneath and then removing the cables to extricate it from the phone body frame. To avoid any damage to the screen, PBK Reviews stops there and proceeds to put the phone together. By the look of things, the phone is easily repairable in case you damage some components while using.