Well folks, someone had to do this and it might as well be us right? Today we present you with a few results from the battle of the cores with the ASUS Transformer Prime quad-core tablet vs the iPad 2. Now when comparing devices there is tons to talk about but we’ll be keeping this short and focusing on a few benchmarks. These were some of the best tests available to test both devices. With different platforms, hardware, and operating systems this can only be so accurate — but we figured you’d like to take a look so here’s the results.

Being Android Community we didn’t put the iPad front and center in our image above but if you look closely you’ll see it sandwiched between a few Transformers. We have a few different results below but first up is SunSpider, an internet browser-based JavaScript benchmark which tests how well your internet is going to work based on the machine more than your connection. Then we have BrowserMark and last is GLBenchmark 2.1 which is one of the only apps that works on both iOS and Android outside of the browser. Before we get started if you’d like to see more of the new quad-core ASUS Prime here is our extended hands-on.

We’ve worked with SunSpider plenty in the past and with this browser benchmark lower is better, here’s our results: 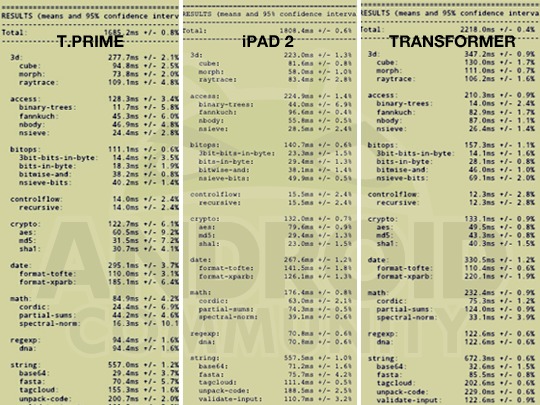 We are also comparing these tests with the original ASUS Transformer dual-core Tegra 2 tablet just for good measure. Here you’ll notice it takes last place with the iPad 2 holding its own pretty well. Then obviously, the Prime with those four cores comes in at the top. It might not be a huge margin but we’ll let you guys decide. Same thing applies to BrowserMark where the newest of the pack reigns supremacy and the older Transformer hanging out at the end of the pack.

Now before you all start commenting — the iPad is running on the absolute latest iOS 5 from Apple and these Android tablets are on the latest version of Android 3.2 Honeycomb. Obviously iOS 5 is brand new and was just recently released and we’ll be sure to take a closer look once the Transformer Prime gets Android 4.0 Ice Cream Sandwich — Google’s latest creation. So while these are as accurate as we could test for now we definitely want to look through this again when we get that tasty ICS on board with this quad-core beast.

Last we ran GLBenchmark 2.1 which tests the actual GPU processing cores inside these devices and is completed outside of the browser. Here the iPad 2 actually trumped both the original, and the new quad-core Transformer Prime for whatever reason. The NVIDIA Tegra 3 actually has 5 cores and the graphics are without a doubt better than what is currently available in the iPad 2. The upcoming Tegra 3 games we’ve seen look simply incredible to say the least. Again this isn’t the easiest of tests in terms of actual comparison or accuracy on such different operating and hardware levels but here’s the results for the last round.

While these tests are a good indicator they are by no means perfect. Either way we’ll just let you guys the readers decide what you think. Don’t shoot the messenger here. The last test the iPad 2 completely destroys the ASUS Transformer and even puts a beatdown on the Prime. Remember that the iPad 2 does have a lower resolution so that could also come in to effect with the GL results. Don’t worry though guys we’ll be doing some actual browser comparisons and maybe even testing a few of the same games to see how everything does and be sure to clue you in on the details.

One more time here is our Transformer Prime hands-on and just for fun is a video below showing you some of that neat hardware and included keyboard dock for the Prime. Expect a few more tests and comparisons over the coming days and we’ll be sure to post an in-depth review soon. If you have any tests or comparisons you’d like to see don’t hesitate to request it in the comment section below.