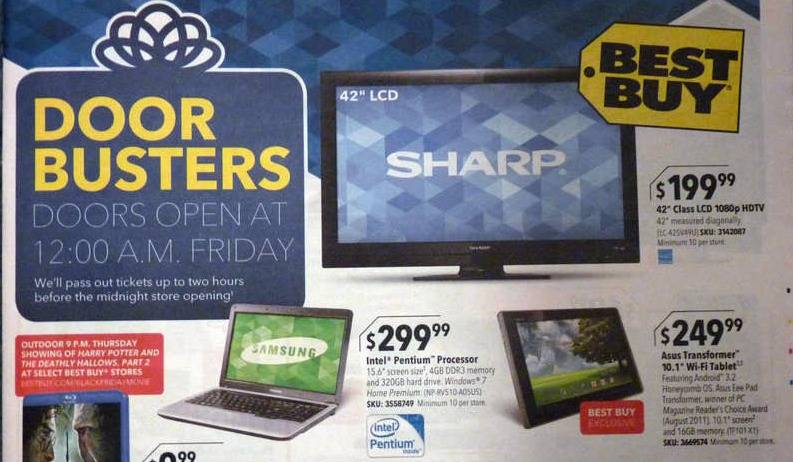 Who’s ready for some Black Friday deals? If you are the type to wake up at 4:00 AM and stand in the cold while fighting off hoards of shopping Mom and Dads during Black Friday, or just really want a new Android tablet then you’ll want to pay attention to Best Buy. They’ve already released a few ads showing off a couple deals for Black Friday coming up in a few weeks and they’ve now appeared on every BF website you can think of. We have the pictures below.

The deal I’m most interested in is posted in the photo above. The ASUS Eee Pad Transformer tablet for only $249. They’ll also have tons of other Android goodies on sale and I’m sure we’ll see even more deals as the day grows closer. You’ll also notice the Toshiba Thrive for $279, the Iconia A100 Tab coming in around $189 and tons and tons of phones for FREE.

Be sure to look over the photos in the gallery below because Best Buy Mobile will also be offering tons of popular Android phones like the DROID Incredible 2, the Samsung Stratosphere and a few more for free with new 2-year contracts of course. We expect to see plenty of deals from Best Buy and many other big box retailers so be sure and check back often as we’ll be posting anything good regarding Android. This is perfect timing for Best Buy to clear some stock and make way for the new ASUS Transformer Prime quad-core Tegra 3 tablet. I’ll be eying that come this holiday season. Will you?

[via The Black Friday]