ASUS really loves its hybrids and is now taking it to the extreme. With the new Transformer Book V, you get two operating systems, three devices, and five modes, all in one complete package.

It is like the best of the PadFone and Transformer line brought together, probably also combining the worst of Microsoft’s and Google’s nightmares. Technically you really only have 2 independent devices, a Windows 8.1 tablet and an Android 4.4 smartphone. Like a PadFone, the smartphone can dock inside the tablet. But like a Transformer, the tablet docks into a keyboard, giving you the third device: a laptop. The five modes then come from the different combinations of form factors and operating systems you can mix with this. First mode is the Windows laptop with the keyboard dock. Second is a standalone Windows tablet. Third is the solitary Android smarpthone. But put the smartphone inside the tablet and you get the fourth mode, an Android tablet. Bring back the keyboard and you’ve got an Android laptop, the fifth mode. 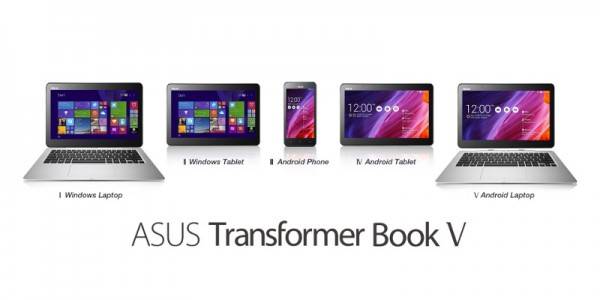 As interesting as this strange contraption may seem, the hardware running underneath the chassis may not exactly be so. The tablet part, which runs Windows, unsurprisingly runs on a Next Gen Intel Core processor whose exact model and speed are yet unknown. RAM is at 4 GB and storage can reach up to 1 TB, depending on the configuration. The tablet itself has an HD front camera and a 28 WH 2-cell battery. The smartphone side is just a tad unusual as far as Android smartphones go, but definitely in line with ASUS’ Intel push. The device runs on an Intel chip as well, an Atom this time. ASUS notes that this smartphone is the first 5-inch LTE smartphone that is powered by an Intel Atom, though the exact performance of that chip in a smartphone is yet to be put to the test. RAM is at 2 GB and storage at 64 GB. There are two cameras on this one, an 8 megapixel at the back and a 2 megapixel at the front. Perhaps one discouraging spec of these two devices, is that while they come in different sizes, 5 inches for the phone and 12.5 for tablet, they both only reach HD resolutions. 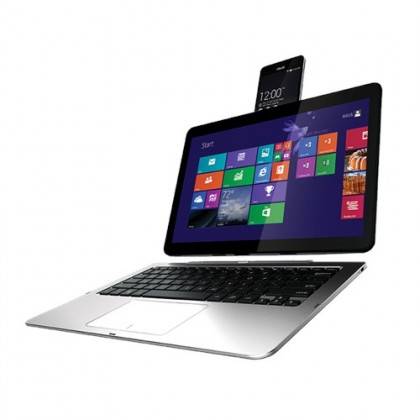 Availability and pricing has not yet been announced by ASUS. There is a slim chance this device might not even see the light of day in the market. Other devices that dual boot Windows and Android, like the ASUS Transformer Book Duet and the Samsung ATIV Q before it, vanished without a trace, rumored to have been due to Microsoft’s or Google’s influence. However, technically the Transformer Book V doesn’t really dual boot the two OS, keeping Android and Windows in separate devices. This loophole is probably what allowed the Transformer Book Trio to emerge unscathed, and hopefully it will be the same story for the Transformer Book V.