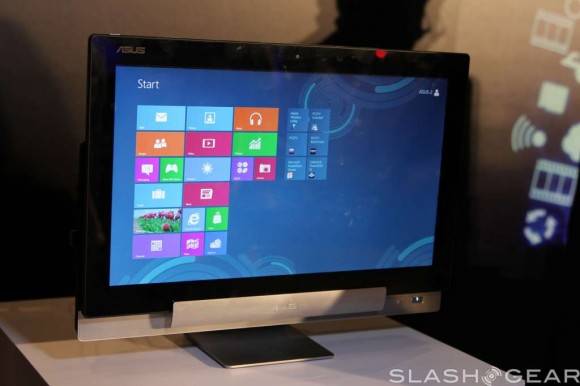 ASUS has hit the ground running this year at Computex 2012 and surprisingly we have some Android news for you. Today they announced their brand new ASUS Transformer AiO (All-in-One) 18.4-inch Windows 8 computer, that also manages to Transform and dual boot into Android 4.0 Ice Cream Sandwich. Although that becomes one huge tablet as you can see from our hands-on pictures below.

Last week ASUS released a few teaser videos about what we could expect at Computex. One that hinted at a dual-boot Windows 8 and Android device, and this was what they had in mind. Although I wouldn’t call the design beautiful, or revolutionary, I do welcome the idea and would love to play with one. 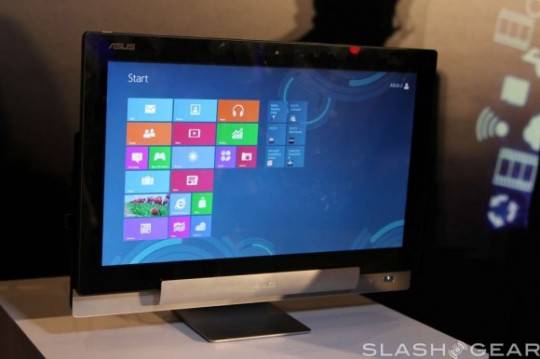 Essentially what the Transformer AiO will be is a complete Windows 8 computing experience on a 18.4-inch LED backlit device that comes attached to a rather large dock. The Transformer AiO initially runs Windows 8, but a button push will cause the behemoth to boot into Android 4.0 Ice Cream Sandwich and become a tablet. You won’t be carrying this 18.4-inch tablet very far, however: the screen acts as a wireless monitor when it’s taken away from the docking base. This leads us to believe everything is powered by the hardware inside of the dock — which is still unknown at this point but most likely Intel’s latest Ivy Bridge processor.

The idea is an interesting one that is for sure, and since you won’t be taking it too far most likely this is just for that moment you want the PC experience while sitting on the couch — on Android or Windows 8. You can see from the hands-on pictures by our sister site SlashGear from Computex 2012 below that the tablet in-hand is rather large.