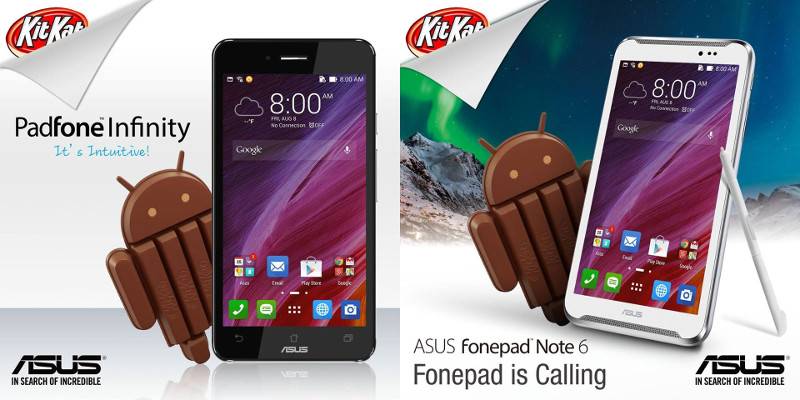 Better late than never, we always say, so we welcome with open arms the very late arrival of the promised Android 4.4 update for the ASUS PadFone Infinity A80, as well as its descent on ASUS’ stylus-wielding Fonepad Note 6. But while the update of last year’s devices to the latest Android version is definitely a good thing, ASUS‘ update methods might make some wonder if they’re really worth the trouble.

When the PadFone 2 got its promised KitKat update on schedule last June, it revealed a rather irksome quirk to ASUS’ procedure. While most manufacturers have embraced Firmware Over The Air (FOTA) methods, this particular device requires the assistance of a PC software to update. But worse than that, it was noted that the update will wipe the device clean, forcing users to start from scratch, at least without a properly made backup.

Unfortunately, that is also the case here with the older PadFone Infinity, model number A80. Users will have to manually download the new firmware and follow ASUS’ update procedures to a T. And yes, it will reset the device, so users are advised to create a backup beforehand. But even more than that, this upgrade will also remove previously pre-installed apps from the device, which may or may not be a good thing, depending on how users have grown habits around those apps. Some apps like Watch Calendar, ASUS Sync, Birthday Reminder, Device Tracker, and more are listed to be removed while some like ASUS Studio and ASUS To-Do are simply renamed.

The update for the Fonepad Note 6 is presumably less involved, though the lack of instructions or notes don’t really inspire confidence. Users still have the option of downloading the new firmware, but ASUS doesn’t mention whether a FOTA method is available or whether it will result in a total wipe. The update, aside from bumping the Android version from Jelly Bean to KitKat, will also introduce ASUS’ new ZenUI to the device. It will also remove some apps that either no longer work on Android 4.4 or are supplanted by native Android functionality. If you own any, or both, of these devices, hit the source links below for the update announcements and links.