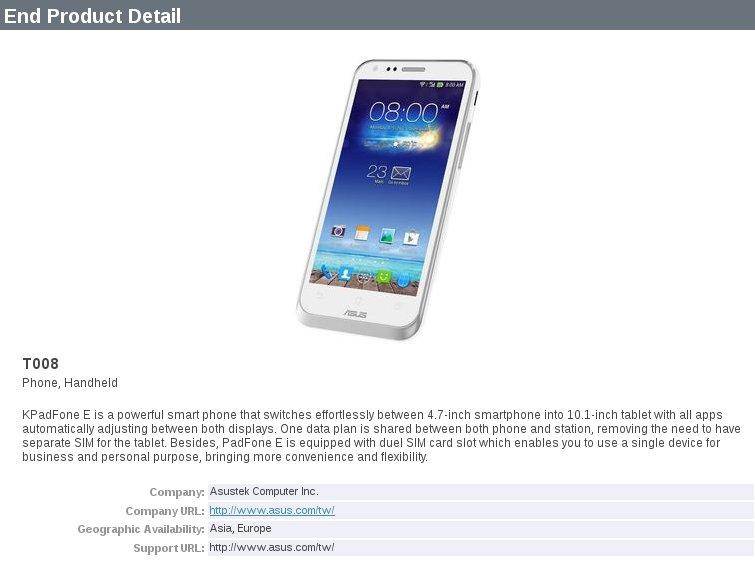 Those who have been quite taken by ASUS‘ curious PadFone device line might have their attention set on the upcoming PadFone Mini reveal. It seems, though, that ASUS has another member of the family hiding behind the curtains. Making its way through Bluetooth certification is a rather strange PadFone E that seems to fill a gap between the PadFone Infinity and the PadFone Mini.

The PadFone Infinity is ASUS’ flagship when it comes to this phone/tablet hybrid. The smartphone half of the unit measures 5 inches while the tablet dock is a good 10.1 inches. In contrast, the PadFone Mini is said to be quite smaller, reaching only 4 inches across the diagonal. Its tablet counterpart is also much smaller at 7 inches. Of course, these specs have yet to be confirmed by an official announcement, which is expected to take place on Wednesday.

Compared to those two, the PadFone E T008 sits right in the middle. Details are quite scarce but, based on the Bluetooth SIG page, the smartphone bears a screen size of 4.7 inches, which slides into a 10.1-inch tablet dock. Another interesting feature of this PadFone incarnation is the fact that it has dual SIM support, unlike the PadFone Infinity or the PadFone Mini.

There really isn’t much to go on about the ASUS PadFone E T008. It is speculated that it will be heading to European and Asian markets which, given the dual SIM option, sounds likely.