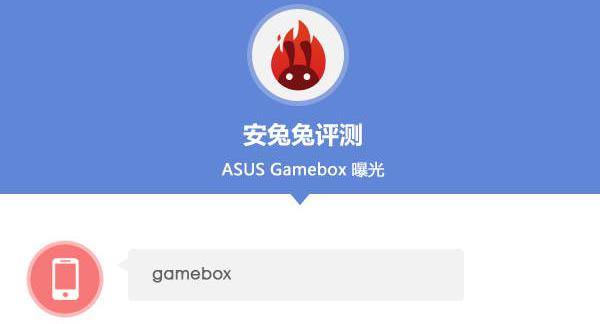 ASUS may have just unveiled its own Chromebox version, but it seems that the manufacturer isn’t done with surprises just yet. Making its way into AnTuTu’s benchmarking site is a device that is simply called the ASUS Gamebox, which makes it totally clear what its purpose is.

Android gaming is slowly trying to distance itself from being merely a smartphone or tablet experience. From gaming handhelds like the Archos GamePad to small gaming consoles like the OUYA, Gamestick, or the Huawei Tron, to something that seemingly tries to bridge mobile and PC gaming like the NVIDIA SHIELD, we have tons of attempts to raise Android gaming to its own distinct category.

ASUS may be the latest to try and dive into that new class of Android devices with the rather obvious Gamebox name. Based on data found on AnTuTu, this one is powered by an NVIDIA Tegra 4, has 2 GB of RAM, 8 GB of internal storage and a 1280×720 resolution display. If those specs sound familiar that’s because it’s almost the same as NVIDIA’s own SHIELD gaming handheld. 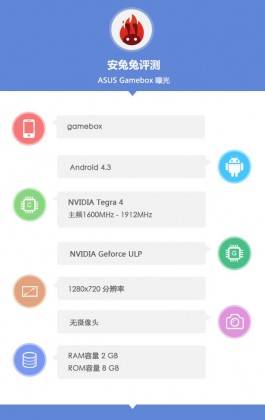 But other than that, the actual form of the device still remains a mystery. Its similarity with the SHIELD’s hardware can lead one to suspect that this will be another stab at a gaming handheld, possibly one with a 5-inch screen as well. The name Gamebox, however, with a similar ring to the Chromebox, could also be implying a more stationary device to be set on top of tables or shelves. Given that there hasn’t been any other word about this mysterious contraption, it’s unlikely we’ll get to find out soon, perhaps not even at the upcoming MWC 2014.