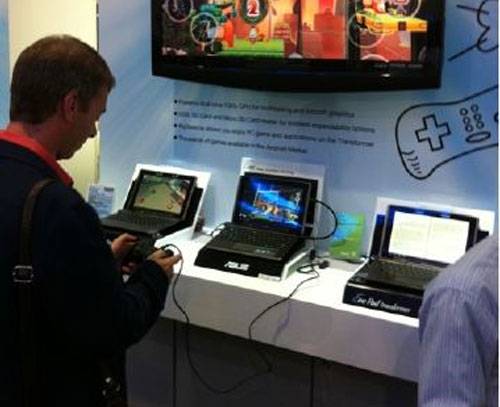 We really dig the Asus Eee Pad Transformer around here and we posted up a review of the tablet earlier this month. The little table has a lot to like. We are fond of the hardware inside the tablet and the cool keyboard dock that will let you actually work from the tablet when you need to. Not long ago the Transformer was updated to Android 3.1 and if you have applied that new update and like to play game apps on the tablet, we have some very interesting news for you today from Asus UK.

According to a tweet from Asus UK, the Transformer tablet running Android 3.1 for the OS is now able to support the gaming controllers from your Xbox 360 and PS3 game consoles. That will bring a whole new dimension to gaming on the device. It’s admittedly hard to tell in the photo here whether the dude is holding a black Xbox 360 controller or a PS3 controller, it looks to be a PS3 controller to me. What you can clearly see is the wire running to the notebook.

I was hoping that with the PS3 controller being Bluetooth that it might work wirelessly. Wires or not, this is a very nice feature and many gamers will really appreciate the ability. Couple some of your favorite Android game apps with the 10.1-inch 1280 x 800 resolution screen and a real game controller and the Transformer will be a very nice device for gaming at home.