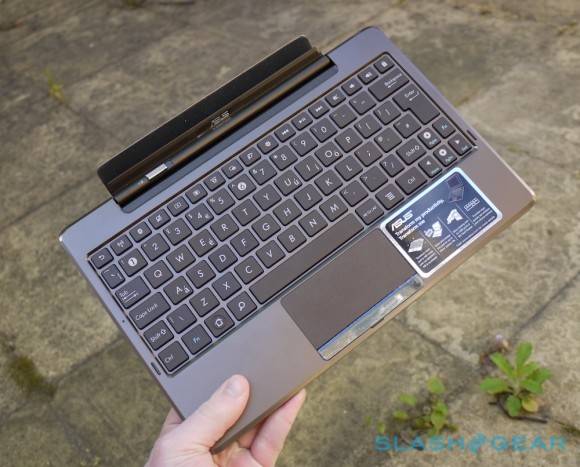 True to form, our good pal Chris Davies has the ASUS Eee Pad Transformer up and running as fast as a bunny, reviewing the heck out of it for you and me so that we might know if it’s really worth the $400 we’ll be paying for it! This device also has the code TF101 attached to it for further IDing and is, in short, a 10.1-inch Android 3.0 Honeycomb tablet with a rather fashionable keyboard dock attachment that essentially allows you to work with the device as a tablet or a laptop. Will it power past the competition?

Before we continue, let me let you know that the full review of this device can be found over on our sister site SlashGear. The following is a nutshelled version of that review, so choose as you must! 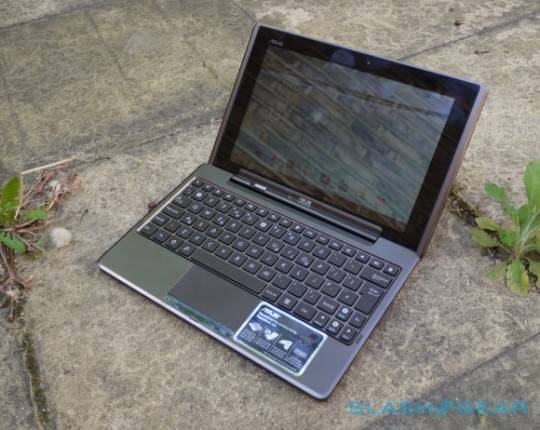 What you’ve got here is a 271 x 171 x 12.98 mm and 680g tablet, making it both bigger than the XOOM and bigger than the iPad 2. The back plastic panel is “reasonably flex-free” and easy to get a grip on. The display is a 10.1-inch 1280 x 800 capacitive touchscreen supports 10-finger multitouch, and yes, this tablet is faced with Gorilla Glass. Everyone’s favorite! The display panel is an IPS LCD, aka doesn’t look like much in direct sunlight but looks fabulous in the shade.

There’s a power/lock button on the upper left hand side next to the volume dongle, ports around the remaining edges include a 3.5mm headphone port, microSD slot, mini HDMI 1.3a, and proprietary docking connector (with which you can use the keyboard.) You may also used the docking connector to hook up to the included AC adapter and USB cable. Helpful!

Inside the device you’ll find the fatness: NVIDIA Tegra 2 dual-core processor, 1GB of memory and either 16GB or 32GB of SSD storage. You’ll be getting WiFI b/g/n (2.4GHz only) and Bluetooth 2.1+EDR for connectedness, GPS, digital compass, gyroscope, and g-sensor. Stereo speakers sit on either side of the landscape-sitting tablet near the bottom – Davies notes that they’re relatively quiet – uh oh! There’s also a mic and a couple of cameras up near the top on either side. 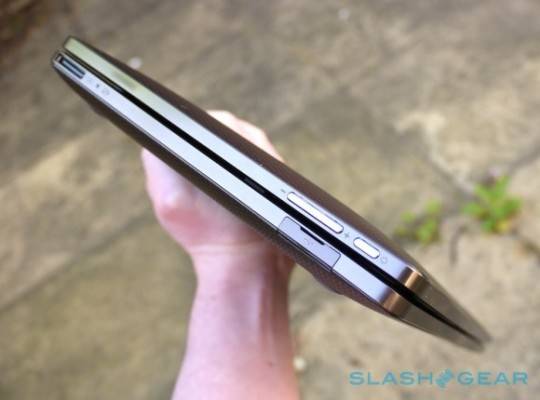 The device is mostly plastic but feels solid. Like all tablets, we really encourage you to go out to a store and get a feel for the device yourself as a tablet is the sort of thing you’ve really got to get the hang of before you commit to. The Transformer is no exception, especially with the keyboard dock sitting on the bottom. Could be bad for you, could be excellent!

This is a Honeycomb tablet that’s essentially right on par with the Motorola XOOM and the Acer Iconia Tab A500. Have a peek at these benchmarks and see, just based on them, if you agree:
1927 in Quadrant Standard
2138 in Quadrant Advanced
42.233 MFLOPS in Linpack Pro
1888.3ms (lower is better) Sunspider test with stock browser
3512 in Smartbench 2011 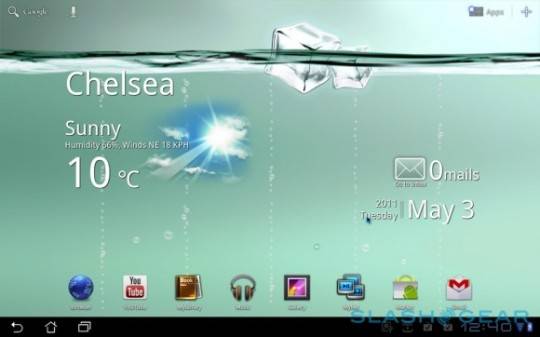 From there, you’ve got to note the following things: Qik crashed every time Davies opened it, there are several apps that only work in portrait mode (this is true of the same apps on other Android tablets, of course,) making it difficult to manage while using the keyboard dock, and the now-infamous water-level live wallpaper (showing the battery level by amount of fluid) appears to be working great.

ASUS’ File Manager is working great with the USB 2.0 ports on the Keyboard Dock, allowing you to very easily use a USB dongle to move files from your larger computer or from a separate device with no effort at all – physical and fun, yes? 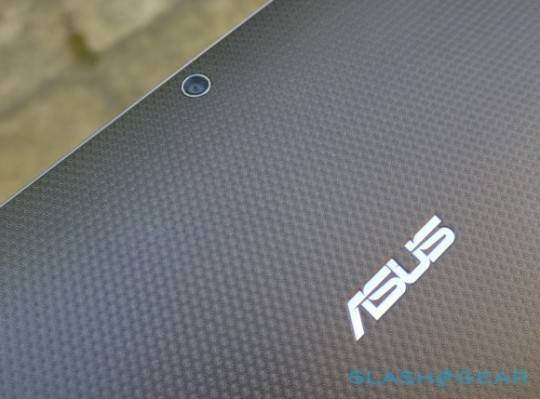 What you’re dealing with here is a 5 megapixel camera on the back and a 1.2 megapixel camera on the front. You’re going to be using that front camera for video chat more than likely exclusively, while the back camera, simple because it’s on a giant tablet and isn’t the most impressive in the world, you’ll want to supplement with whatever smartphone or separate camera you’ve got on hand. This camera you’ll probably only want to be using for sending fun shots to Facebook – or whatever else it is you do with such generally ok shots. There’s no flash on the back, dark shots are basically not worth documenting, close-ups and far-offs with a healthy dose of light fair the best. Video, Davies notes, looks alright played from the tablet and uploaded to YouTube, but have some trouble playing on whatever other device he’s got handy. Strange trouble, but notable. 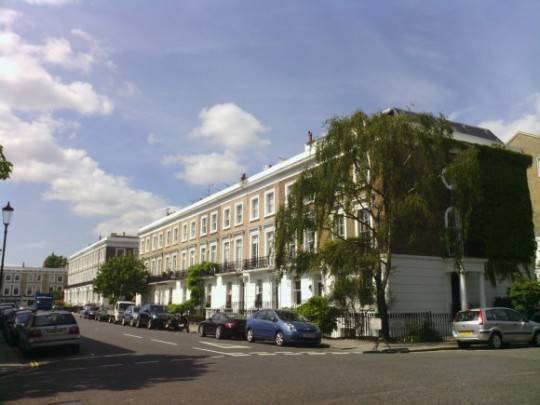 Take a peek at the separate post “ASUS Eee Pad Transformer Keyboard Dock Review in a Nutshell” for more information on this oddity. 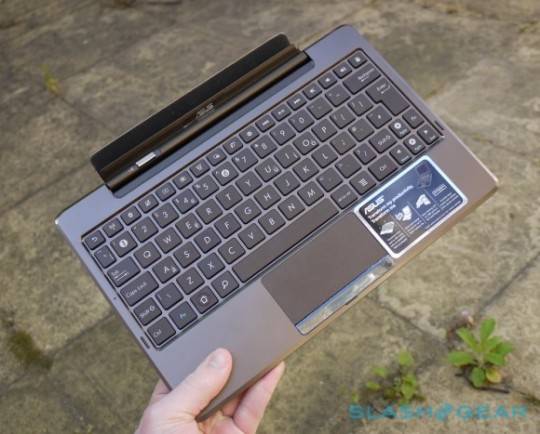 Davies found medium to high usage resulted in between 6.5 and 9 hours of on-time, and that’s without the keyboard attachment. With the keyboard (an accessory that adds battery time,) he say and extra 6-7 hours. Standby time was less impressive than the iPad, says Davies, and we must surmise that this also means it’s less impressive than the XOOM, the Motorola tablet lasting several days at least on standby while the Transformer seems to be peaking at a few days. 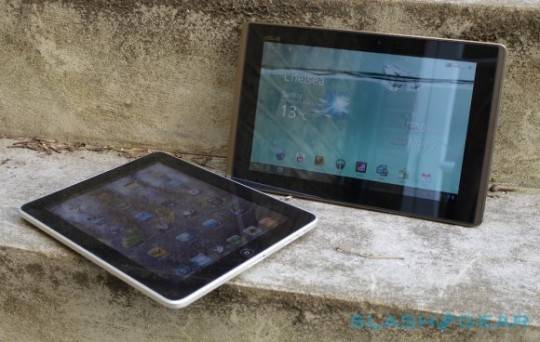 Here’s all the prices you’re going to need to know, and keep in mind these are current prices when the post is posted, not what they are when you’re reading it weeks later, not a price from ebay or any nonsense like that – the 16GB TF101 slate on its own is $399 in the US or £379 in the UK; the 32GB model is $499 or £429 respectively. These are prices for the wifi-only version, a 3G-enabled version coming some months down the line, so says ASUS.

How much is that keyboard dock? It’s $149 in the USA, or if you’ve in the UK and purchase the smaller slate, you can get the dock for just £50 more. How does this compare to the tablet’s competitors? How about the WiFi-only Motorola XOOM (with 32GB of storage) at $589.99? How about the iPad at $500? ASUS definitely has a competitor here, if only in that extra hundred bucks that people are seeing as very enticing at a glance. 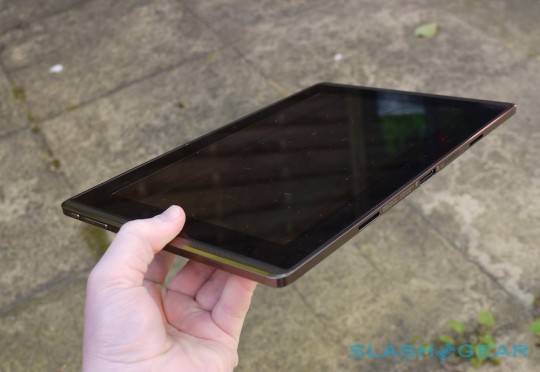 What you’re dealing with here is a full-fledged Android 3.0 Honeycomb tablet with the added encouragement to use of a keyboard that turns the device into a legitimate netback and a collection of apps that aren’t just bloatware – they’re helpful and well placed. As Davies notes: “Being able to remotely log into our home computer and access files there, as well as not only review but create and edit documents on the ASUS left us feeling a whole lot more confident about leaving our laptop at home.”

Davies also says that this is the best Android tablet on the market right now. Until I’ve got that bad mother in my hands here I can’t confirm nor deny that subjective claim, but as I do trust D implicitly: XOOM, G-Slate, Galaxy Tab, and even iPad, you’d better watch your back. Will it be able to compete with the ultra-fashionability of the incoming Galaxy Tab 8.9 and 10.1, or the pen stylus and again, great looks of the HTC Flyer, and all of their custom UIs? That shall only be known on the day!