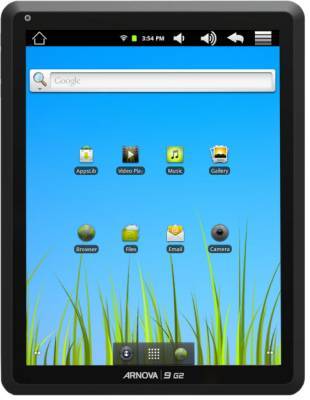 Honeycomb may be all the rage with Archos’ top of the line tablets, but they never miss an opportunity to make good with the low end as well. Behold the Arnova 9 G2, a Gingerbread 9.7-inch affair with tablet-friendly modifications to Android. Even so, the tablet packs in some respectable hardware with a 1Ghz ARM processor and 8 gigabytes of built-in storage.

In a strange move, the Arnova 9 G2 has a 4:3, 1024 x 768 LCD screen, just like the one found on the iPad and HP Touchpad. That’s a departure from the majority of Android phones and tablets, which use a 16:9 or 16:10 ratio. Because of the lower pixel density for a panel of that size and resolution, it’s probably a lot cheaper to manufacture than the ones we’re more used to seeing. Naturally WiFi is the only wireless option, though Archos continues its tradition of expandability with a microSD card slot, micro and full-size USB ports.As with most Gingerbread tablets, Google services and Android Market access are nowhere to be seen.

Gingerbread may be a buzzkill now that Ice Cream Sandwich is well and truly here, but Archos has a vibrant community of modders, so you can expect to see an ICS ROM show up once the Arnova is released. On that note, there’s no pricing or availability info just yet, but expect it to be considerably less than the already cheap G9 Honeycomb tablets. We’ll be keeping an eye out for other sizes in the Arnova G2 series.