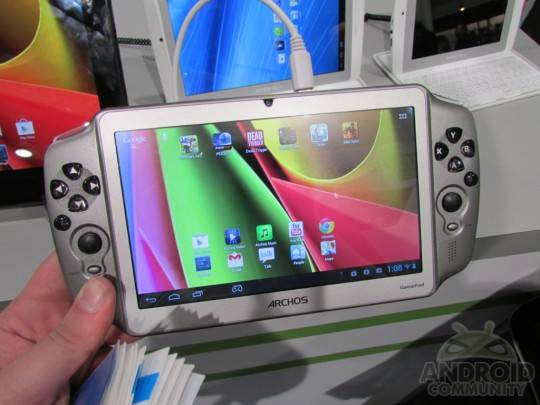 Archos launched the GamePad tablet (outside the US) back in December. And well, since then the company had been quiet in terms of a US release. Of course, they were showing the GamePad off during CES and along with that comes word of a US release. Unfortunately nothing as specific as an exact date, however a timeframe.

In short, it looks like Archos will have the GamePad available for those in the US next month. The details come by way of Phil Geldard from Archos who has said that the gaming tablet will be available in February 2013. The price will be $169. Considering we are just about half-way through January, the wait for a release should not be all that long.

Otherwise, as a recap, the Archos GamePad will bring a 7-inch 1024 x 600 capacitive IPS display with Android 4.1.2 Jelly Bean. Other specs include a dual-core 1.6GHz processor, quad-core graphics, 1GB of RAM and 8GB of internal storage. And for those who are curious, we did manage to get some hands-on time during CES. The GamePad does have some good and bad points. For example, the GamePad is lightweight, but while that makes it nice to hold for long periods of time — the GamePad does have a plastic quality and we know how that sometimes feels in-hand.

Another item worth mentioning, you will have to map the keys to specific functions, however to ease the difficulty here, Archos is offering a key mapping technology. Bottom line here, if you are in the US and have been waiting for the release of the GamePad — you may want to start setting aside some money as the release should be here sooner rather than later.