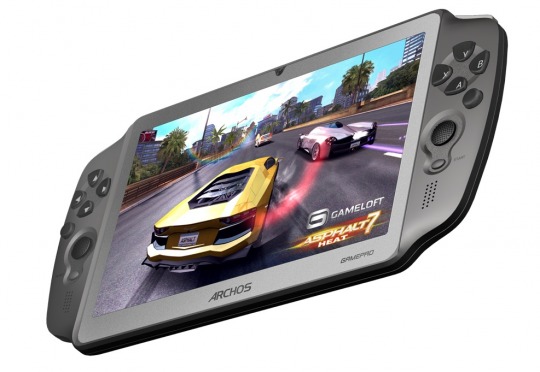 Remember that Archos GamePad with a 7-inch display and a built-in gamepad we mentioned back in August? Well today the tablet gaming hybrid device is making an appearance online in a new video showing off those unique gaming features. This certainly isn’t an ordinary 7-inch tablet so lets take a look.

Back in August Archos announced this 7-inch 1024×600 tablet rocking Android 4.0 Ice Cream Sandwich, a 1.5 GHz dual-core processor (confirmed Rockchip RK3066) and the key point here is they’ve built it into a dedicated gaming pad with all the controls, triggers, and bumpers many gamers are familiar with. The original announcement slated it for an October release but we’ve not heard anything regarding it since.

Today however the folks from Armdevices.net were lucky enough to get about 7 minutes of hands-on time with the device. Below you’ll see the 7-inch gaming tablet playing a few emulators, mapping on-screen controls to the built-in gamepad, and much more. Check it out!

Interesting right? One of the most important features aside from the physical controls is the built-in automatic key mapping system. You can even see within the first few minutes of the video just how easy Archos will make it to map the controls for the ultimate gaming experience. It might not be a PS Vita, but then it does come with Android, HDMI-out and everything else we love about Android tablets. Originally we reported this would arrive at the $200 mark with Android 4.0 Ice Cream Sandwich, but according to reports Archos is aiming for a $149 price point and it will be running Android 4.1 Jelly Bean. Who’s interested now?