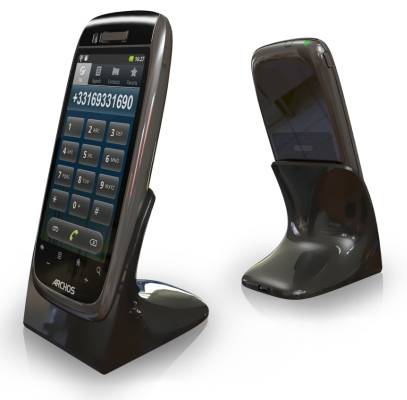 While mobile phones are advancing in leaps and bounds (due in no small part to Android), the biggest thing to happen to landline phones in the last few decades is losing the curly phone cords. Archos aims to change that with the model 35 smart home phone, which has been available in Europe for the last few months. The Android-powered landline phone recently made its way through the FCC.

For the equivalent of $160, you get a 3.5-inch “wireless” phone with a 3.5-inch, 272 x 480 screen and a 1Ghz processor. 8GB of storage isn’t the best out there, but it’ll hold a few million of your most important contacts, and Froyo is more than enough to handle PIM functions. The phone comes with a spiffy stand/charger. A front-facing camera and WiFi connection make it suitable for video calling, and access to apps (possibly not the Android Market) makes it at least somewhat expandable.

Others have tried to re-imagine the landline phone, with mixed results. There just doesn’t seem to be much interest in high-end landline hardware, especially with how expensive cell phones are. But Archos has been carefully cultivating a reputation of filling all niche markets outside the smartphone realm, from tiny video players to huge tablets, and doing so in a budget-friendly fashion. Here’s hoping we see the Archos 35 on American shelves soon.