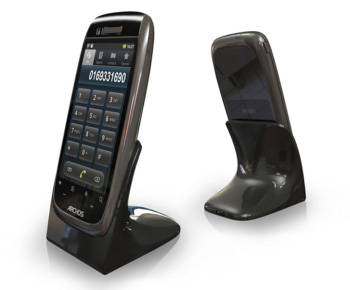 Just when you thought the home phone was dead and gone for so long that it’d never come back, Archos hits you in the face with a new release. Android for your home. That’s what they’re saying this device is, and with a 3.5-inch touchscreen and a dock that you’ll be proud to put in the sun-faded spot where your landline phone used to be. This device also has a wireless receiver separate from the dock and is compatible with all ADSL boxes, phone lines, and uses standard DECT protocols so you’ll be rolling out fine with your everyday DECT bases you already own. You already own one, right? Of course you do.

Not a whole heck of a lot has been revealed about this device, but what we do know confuses us. Why would Archos release a handset, a mobile, wireless handset that cannot go outside the home? Will it be given away for free, or will your landline bill be cheaper than your mobile bill – wait, that’s it! Everyone knows that it’s cheaper to own a landline than it is to own a cellphone, so Archos has hit the bell right on the head! 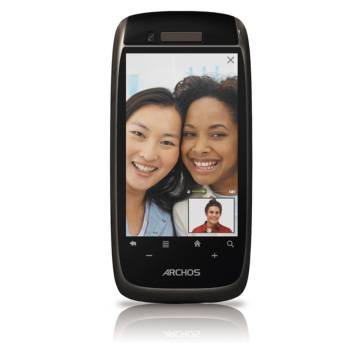 This device is capable of making called as most Android devices at this moment are prone to do, plus it’s got a 3.5-inch touchscreen that works for video chat. The front-facing camera is apparently capable of a surprising 720p video, so maybe this should be the device you’re using to chat with your long-lost relatives across the USA. There’s also a built-in app which allows you to use the device as a baby monitor or surveillance camera. Creepy!

Then of course it’s got “access to thousands of Android apps.” Whether or not the device has access to the Android market is still up for debate, but given the fact that the two tablets Archos put out earlier today do, we’re thinking this device might also. Google, did you approve? We’ll see soon enough.