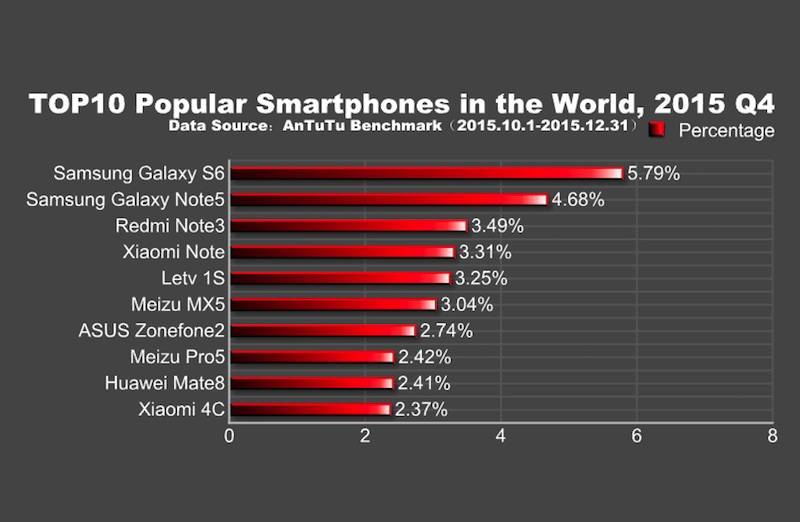 AnTuTu already named the ‘2015 Global TOP 10 Best Performance Smartphones‘ a few weeks ago. That’s way before we learned the ‘Top 10 Popular Android Smartphones ‘ during the last quarter. The first report we featured included the iPhone as it was the first time AnTuTu covered both mobile platforms. The iPhone 6S Plus ruled followed by the Huawei Mate 8.

For the last quarter of 2015, the Samsung Galaxy S6 was the top winner followed by the Galaxy Note 5. That’s interesting because the Galaxy S6 didn’t even land in the Top 10 Best Performance Smartphones. But then again, we’re talking about “popularity”. This refers to the number of phones that used AnTuTu which means more Galaxy S6 phone owners run AnTuTu on their units.

Most of the phones in the global list are from China–Redmi Note 3, Xiaomi Note, Letv 1S, Meizu MX5, Meizu Pro 5, Huawei Mate8, and Xiaomi 4C. Only one is from Taiwan–the ASUS ZenFone 2 but yeah, it’s still Chinese.

AnTuTu also published reports per key country markets: China, Taiwan, HongKong, Korea, US, Russia, Germany, India, Malaysia, and Vietnam. Check out the graphs below to see which phones made it to Top 10 in each country:

Here’s a quick rundown of the most popular smartphone models per country:

Xiaomi’s phones (Redmi Note 3 and Note 2) topped in five countries. HTC was most popular in its native Taiwan while Samsung ruled in South Korea, United States, and Germany. It’s only in India where OnePlus won.

Based on the number of times phones from China appeared across all lists, we can say the Chinese manufacturers ruled the mobile industry, at least, when we’re talking about Android. We have yet to hear a report that says Xiaomi got back its crown from Huawei for being the top phone maker in China but looks like Xiaomi was more popular last quarter.

Note that AnTuTu’s database include only those that used the AnTuTu Benchmark app. NOT ALL Android users run AnTuTu on their phones so the data only cover those AnTuTu users. Data isn’t comprehensive of all phones all over the world. We don’t know how many percent of the whole Android community are on AnTuTu so we don’t know which ones are really popular.