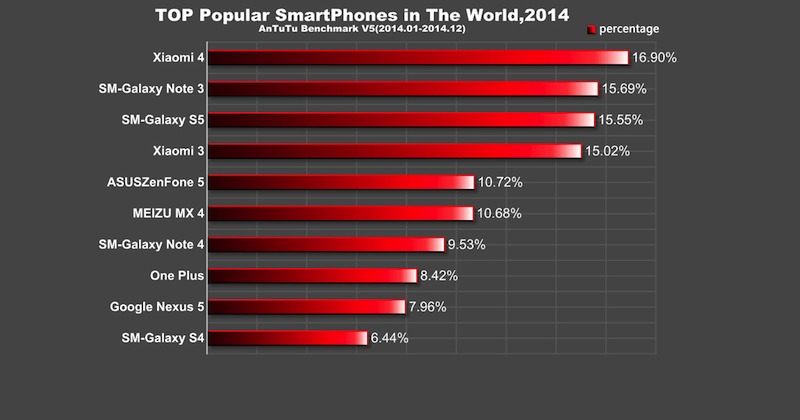 Just last week, AnTuTu released the end-of-2014 awards with Meizu MX4 on top of the list. It wasn’t a big surprise because the same phone also topped AnTuTu’s best performing smartphone for the 3rd quarter. This time, we’ll know the most popular smartphones across the globe. Also released were rankings of Android smartphones in some countries.

The AnTuTu benchmark is one of the more reliable benchmarks in the market because it is comprehensive and includes important areas like “Database IO” performance testing, SD card read-write speed, 2D and 3D Graphics Performance, CPU Floating Point Performance, CPU Integer Performance, and Memory Performance.

Xiaomi being in the lead is expected because the number of smartphone users in China is growing. This also proves that China is indeed an emerging market, contributing a large part to the global ranking and numbers. Looking at the number of devices included, Samsung is a big winner with four entries. One Plus and Meizu joined the list, showing yet again that Chinese manufacturers are doing great. 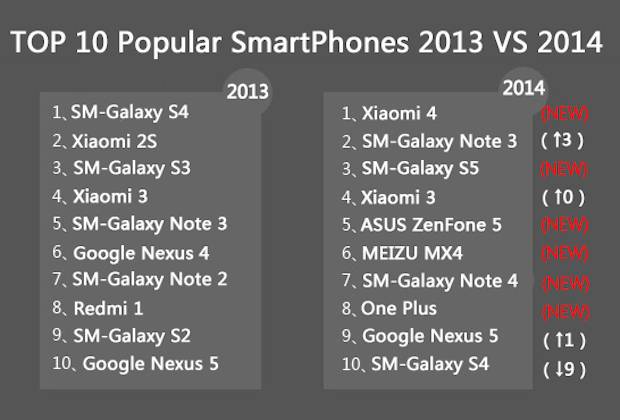 In Mainland China, smartphones from Chinese OEMs dominated the market. Of course, Xiaomi is still on top then there’s Meizu, Redmi, Coolpad, HUAWEI, and Nubia. The only non-Chinese brand on the list is Samsung.

In other countries, the phone models and brands vary. On top of each list were the following:

Very noticeable is ASUS ZenFone 5 being No. 1 on four countries. The phablet Galaxy Note 4 also leads with another Samsung model, the Galaxy S5. Xiaomi leads in India which is not really surprising.

Check out the Top 10 Popular Smartphones in different countries below: