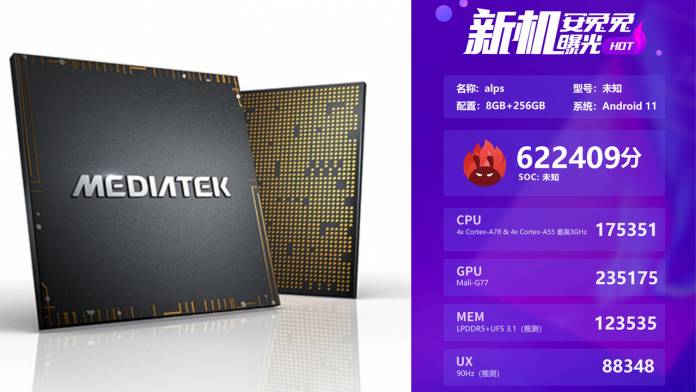 After showing promise with the Geekbench tests, the MediaTek MT6893 chipset slated for 2021 also looks promising as per the AnTuTu benchmark testing. The chipset is one of the three SoC’s coming in the TSMC’s 6nm process-based Dimensity lineup. In fact, it can be said as the middle variant of the three processors developed by MediaTek to take on Qualcomm. The chipset shows promise as revealed by the speed tests for CPU and GPU performance – edging out the outgoing Qualcomm flagship – the Snapdragon 865.

This spells good news for phone manufacturers looking to go the MediaTek alley since Qualcomm chipsets are a tad pricier. According to the official AnTuTu benchmark tests, the MediaTek MT6893 chipset got a better combined score as compared to Snapdragon 865 on the Oppo Find X2 Pro.

The chipset in development has a better GPU performance, whereas it lags a bit behind in CPU scores. The unidentified phone used for the test is an 8GB RAM/256GB storage version running on the 90Hz display having 2300×1080 resolution.

Compare this to the Snapdragon 865’s scoring chart – the overall score is 611419, CPU score is 186750, GPU score touches 222405, MEM score is at 103906, and UX score is slightly higher at 98350. Although these are preliminary results, the picture will get clearer in the coming months about the performance of the upcoming chipsets by MediaTek.