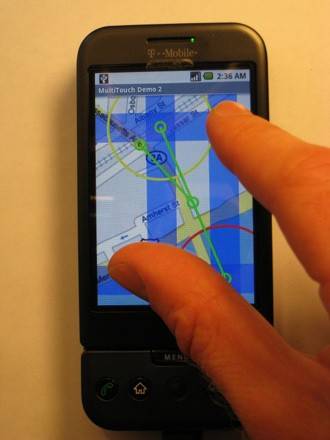 Some of you may be getting sick of seeing the same Android news over and over again while hoping for something new. Sadly this post is just another story with a different look. Multi-touch has been demonstrated on the T-Mobile G1 before, but here we go again.

Back in November we reported on a video made by RyeBrye that showed that two separate finger presses could be recorded on the G1 if the kernel was recompiled with the functionality put back in. Now we have another video created by Sir Luke Hutch. He claims to provide this demo on a stock G1 and will release instructions for developers who would like to incorporate it into their applications.

He modified just one system class in the Java-based user interface stack. From what we can see this appears to work perfectly. So does this mean we will be seeing multi-touch in Android applications in the near future?  Got 6 minutes? Take a look at this video and tell us what you think.