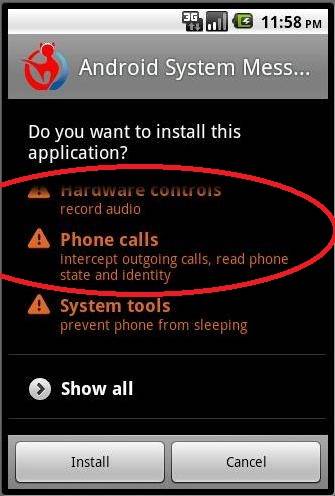 Over the past few months we have seen a few of these types of things here and there but this takes things to a whole new level. Previous virus applications would mine user data and passwords and that is pretty bad I must admit, but this newly found app appears to record your actual phone calls — not cool!

Now some users might not check what permissions an app actually can access when they install something as most are pretty safe, but installing random 3rd party applications that aren’t widely available and known you should always check what you are installing and allowing access. Circled in the image above are the two scary ones here. Record audio and intercept phone calls — no thank you! If you see anything that doesn’t seem right you should probably not install that application.

Apparently this jem of an app will record your phone calls and then save it to your external storage or SD card and it will then be uploaded to the totally awesome (lame) people that produced this terrible application. Your entire call can be remotely uploaded right to the bad guys and even though we don’t always say important things over phone calls, for some this is a huge deal and something I don’t want happening whether the conversation is important or not.

Don’t be too alarmed as these applications are far and few between and we rarely see them around for very long. Most likely all you daily users are safe but just use caution when installing random applications and always read the permissions especially if the list is unusually large.