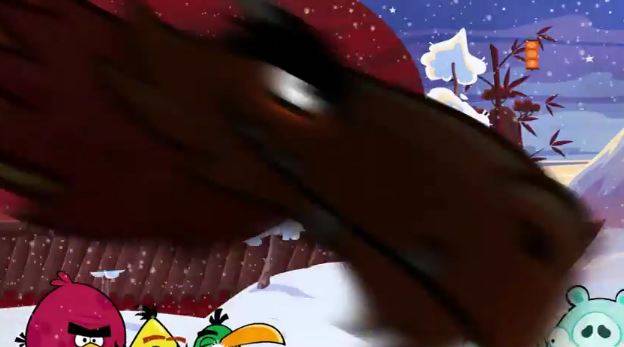 Had enough of frustrated avians? They you’d best read the next story. The ultra-popular Angry Birds are at it again with yet another edition of Angry Birds Seasons, due in January. According to a the latest YouTube video, it’s likely to commemorate the Chinese New Year. The Year of the Dragon starts on January 23rd in the western calendar, so expect the updated app to become available some time in the next few weeks.

The new edition of Angry Birds Seasons, which doesn’t have an official name just yet, is obviously going to come equipped with some sort of Asian theme. A quick glance of something like a cross between the Mighty Eagle and a dragon might mean a new playable bird, or just a fun themed version. If you’ve been keeping up with the ever-changing updates, you’ll no doubt remember that the September version celebrated the Chinese Mid-Autumn Festival. Angry Birds Seasons has been downloaded more than 50 million times on Android, and the Seasons add-on app has been downloaded almost as many times. Unlike the iOS versions, both Android apps and the movie tie-in Angry Birds Rio are free with advertising.

The Angry Birds have been seeing quite a few promotions lately, notably for the Samsung Galaxy Note in the UK. Not everyone is pleased with Rovio’s massive popularity, including Henk Rogers, the co-owner f the Tetris brand. He equated the game with a fad in an interview. That may be true, but Angry Birds is certainly equivalent to the Tetris or Pong of the mobile world (no, Snake doesn’t count), and continues to win new fans with every update. Just don’t be the guy who plays it with the sound enabled on a bus or plane – you might inspire some ballistic demolition from your fellow passengers.