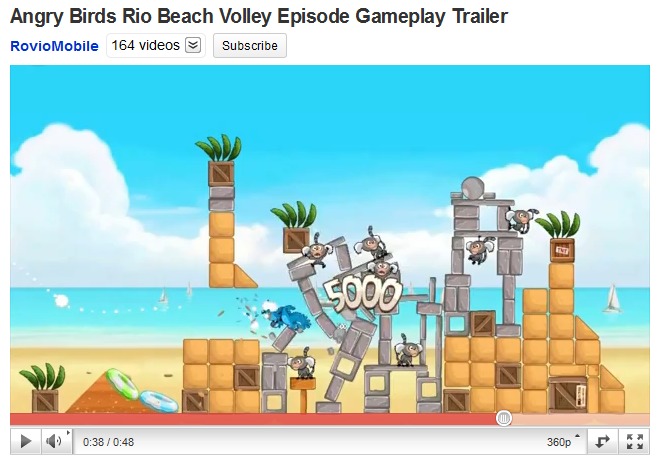 Remember earlier this week when we reported about the Angry Birds Rio update? Well, the screenshot was a strong hint that Rovio is releasing a Beach Volleyball game level. In addition, the Rio update also brings that gorgeous Blue Parrot to life, as it’s playable!

Once the Parrot gets airborne AB style, users can keep him flying by tapping the screen, making him fly farther. The Blue Parrot is also joined by the Boomerang Bird who doubles back to take out the wild monkey’s edifices from behind. There is also what Rovio hints at as “marmoset-mauling action” which could add a bit of ground attack to the game, perhaps? Secret rewards include a Golden Watermelon for this level as well as other golden fruit, area trophies, and three star bonuses.

Based on the 20th Century Fox film RIO, the game showcases Blu and Jewel, rare Macaws who find love in South America, but are kidnapped by greedy poachers. The Birds are called in to wreak angry vengeance, free the rare birds and save the day. Angry Birds Rio can be downloaded from both the Amazon App Store for Android and the Android Marketplace. The update will be coming next week.